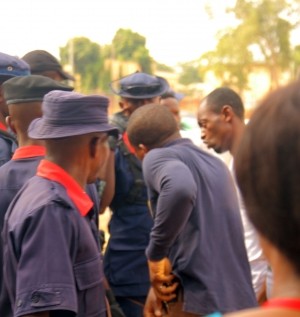 Over 17 Nigerians died. They died due to the negligence and greed of Abba Moro. Abba Moro is yet to to be prosecuted and we are here to remind Nigerians that 17 people died.

They will of course try to discredit us. They might send down thugs to start a screaming fit within our lines. They might even start a fight or two so their police and civil security men to intimidate, harass, and possibly arrest us. They will do anything they can to take attention from what matters: that greed and negligence resulted in the death of over 17 of our comrades.

Instead, they will write in the papers and claim we are sponsored by the opposition. That we are trying to stir up trouble. That we are doing it to get popular. If these accusations didn’t come up, this would no longer be Nigeria. What they won’t tell you is the hours we spent sending emails, DMs and SMS organsing what time and date worked for most. They won’t tell you of the hours spent under the sun arguing about price, watching carpenters build coffins from scratch in Kugbo.

The won’t tell you that we are just Nigerians who only want the rule of law to be applied. And we don’t ask for much: the prosecution of the Minister of Interior Mr. Abba Moro for murder.

They also won’t tell you that we aren’t doing this just for those who died or got injured. Only the protesters can tell you why we did this, and why we won’t stop until we get justice…

We are doing this because on the 15th of March it wasn’t us but on the next recruitment exercise, it could be any one of us. We are doing this because we want to live in a just and equitable society and we can’t achieve that until government stops rewarding the greedy and incompetent. We are protesting to remind you that over 17 people died because of the greed of a few. And we should all stand up until justice is served.

We were arrested yesterday according to what one of the officers called “order from the Minister” but were released about six hours later. We were moved between the Civil Defence (NSCDC) to Police to the State Security Service (SSS) but if all of the people who arrested us yesterday learned anything at all, it is that they must now know we are undeterred and undaunted. Let it be known and let it be clear, blackmail and intimidation cannot stop us. Only the sack and prosecution of Abba Moro can get us thinking of stopping while Drexel Technologies and all their cronies must be made to pay for what they did to fellow Nigerians and comrades on the 15th of March, 2014.

PS: We will in due time share details around of our arrests. We should at this time thank all our friends who kept the heat on. If we had any doubts about our collective struggle, the show of support was so overwhelming it drowned every doubt. We are all in this together.

Opinion: The Hypocrisy Of Northern Nigeria Elders On Boko Haram