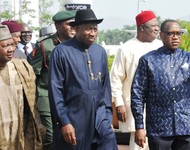 President Goodluck Jonathan on Saturday said African leaders should prioritise the structural transformation of African economy if they must achieve regional industrialisation initiative.

Jonathan said this in Abuja at the 7th Joint Annual Meeting of the Economic Community of African Conference of African Ministers of Finance.

He said: “the theme of this conference, industrialisation for inclusive and transformative development in Africa is of special relevance to Africa at this time.

“Here in Nigeria it corresponds with the transformation agenda and ongoing programme of national renewal.

“The structural transformation of African economy must continue to be a core priority to close the poverty gap and industrialisation must be key for transformation.”

He said African economies in the 1980s and 1990s had gone through many challenges and saddled with high foreign debts.

According to him, the GDP growth of most countries was about two per cent on the average but has reversed recently.

“Our foreign debts are in decline and the foreign direct investments are positively coming up in the continent.

“In fact, African Diaspora are also investing robustly in our economies and in the past decade African economy has grown to about five per cent,” he said.

He noted that the benefits of the positive economic growth had been restricted by inequality, noting that countries must work together for the benefits to spread to the grassroots.

He said that although many of the African economies had been classified as middle income, frontiers and MINT economies, they still shared common challenges.

He noted that some of the challenges which needed to be fixed included job creation, industrialisation and building social safety nets.

“We need to focus on industrialisation as a backbone for our structural transformation,” he added.

Jonathan noted that the impact of industrialisation in countries such as Malaysia, Taiwan, and Brazil among others remained relevant adding that Nigeria had continued to learn from them.

He added that the launch of the industrial plan was to boost the sector from four per cent of GDP to 10 per cent by 2017.

He said the plan focused on four areas of light manufacturing, agro business, petrochemicals as well as solid minerals and metals.

This, he said, might not take off until the nation’s infrastructure was fixed adding that same would be applicable for the continent.

He said Nigeria had made infrastructure core priority and had transparently done the power sector privitiasation and the launch of the construction of N117 billion second Niger bridge.

He called for effort to ensure that positive economic growth in the region was translated to jobs to change the lives of Africans.

“As we grow our economies it’s our obligation that we carry everyone along; we can learn from some of the social programmes introduced by Latin American countries.

“We must ensure that the social protection programmes will become financially sustainable and also reach the reality of those that need our support,” he said.

He urged the conference to focus on issues as they affect the continent especially in the areas of corruption, insecurity and come out with practicable recommendations.

“Whenever you mention security, I always remember that sometimes when you look at the characters that carry the weapons in turbulent areas, including the Northern part of Nigeria, you see a young person carrying AK 47 equivalent of 1000 U.S. dollars.

“But the total thing he wears in the body is not up to 50 U.S. dollars; so where is the money coming from that they use in buying these weapons to kill and increase our problems.

“We need to find out if there are external forces that don’t want Africa to grow by providing these weapons.

“So we should all work as a team and share knowledge on social financial options for regional infrastructure projects.

He expressed the hope that good industrialisation plan and trade would help to consolidate the positive economic growth witnessed in the region.