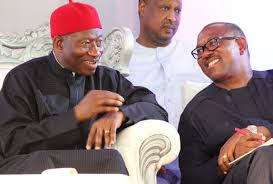 From the grapevine, it looks like the immediate past governor of Anambra State, Peter Obi will be appointed the Minister of Aviation, to take over from Where Stella Oduah Stopped. Sources say the President is pressured by State governors and the Secretary to the Government of the Federation, Ayim Pius Ayim to appoint him the Aviation Minister.

Following the end of Peter Obi’s tenure as Anambra State Governor, there has been speculation and rumor making the rounds of President Jonathan’s intention to appoint the former governor to join his cabinet of ministers.

Obi’s administration has posted an end-of-tenure figure of N75 billion in savings, investment, expected bank balances and FGN approved refund for Anambra State, has maintained a robust relationship with the President, despite political parties’ differences.

At the moment, no native of Anambra is at the Federal Executive Council but to top it all up, the position of the nation’s Aviation sector seems to have been kept for the people of Anambra as the immediate minister, Ms Oduah also hailed from the state.

The appointment of Obi as Anambra governor was also declared public during the grand breaking ceremony of the second Niger Bridge, by the Delta State Governor, Emmanuel Uduaghan who appealed to the President to engage Peter Obi.

The President is to send more names for Ministerial appointment to the Senate and Peter Obi will not only be names but will end up as the Aviation Minister, according to sources close to the Presidency.

Though Peter Obi’s Senior Special Assistant on Media and Publicity, Mr. Valentine Obienyem, in a signed press release has described the report/rumour as a figment of imagination.

The Leader of the South Governors Forum (SSGF), Governor Liyel Imoke is leading the South South Governors intensely lobbying President Jonathan and the Presidency to get Obi appointed the next minister for aviation.

The Lobby also has the tacit support of all the South East governors led by Governor Theodore Orji of Abia State, who succeeds Obi as the Chairman of South-East Governors’ Forum.

It seems that Mr. President has given into the lobby. Thus, any moment from now, Obi will be stepping into the equally-large shoes of heading the aviation ministry.

Though Obi has said he was going to retire from active politics, but it seems the former governor will not be turning down an appointment by President Jonathan to lead the Nations Aviation Industry.