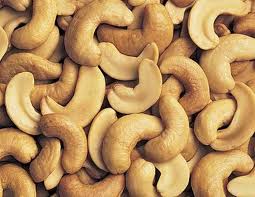 Dolapo said this on Tuesday in an interview with the News Agency of Nigeria (NAN) in Ido, Ido/Osi Local Government Area of Ekiti.

According to her, cashew nuts are ripe with proanthocyanidiusi, a class of flavanois that can starve tumour and stop cancer cells from dividing.

She said that the intake of the nut, which is kidney-shaped seed, was also good for people who want to lose weight.

Dolapo said that cashew nuts contained less fat than most other nuts, adding that cashews were high in dietary fiber, which made it essential for controlling weight gain.

The nutritionist also said that cashew intake was okay for bone development as it was very rich in magnesium which was required in humans bones.

She said that the iron, phosphorus, selenium, and zinc contained in the nuts were good sources of phytochemicals, antioxicants and protein.

Dolapo advised people to eat cashew nuts, and also urged farmers to engage in the cultivation of cashew trees , saying that its economic importance were many.