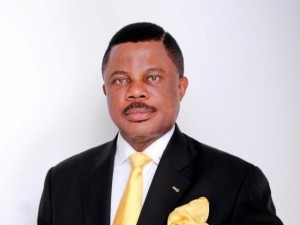 The seventh civilian governor, of Anambra state will today takes the oath of office for the next four years, managing the affairs of the South-Eastern State.

Willie Obiano, Candidate of the All Progressives Grand Alliance (APGA), was declared winner of the governorship election in Anambra State by the Independent National Electoral Commission (INEC) of Nigeria.

Professor Chukwuemeka Onukogu, the Resident Commissioner of INEC in Anambra state declared in Awka that Mr. Obiano won the election by polling 180,178 votes in 19 local government areas in the state.

The Presiding bishop of Awka Catholic Diocese, Most Revd Dr Paulinus Ezeokafor, declared that Governor Obi laid a solid foundation for future leaders to stand on and take the state to a higher pedestal.

Obiano, the new Anambra governor, Born in 1955, is a native of Agulueri-Otu in Anambra-East local government area in the North senatorial district, obtained a B.Sc. in Accountancy from the University of Lagos in 1979 and MBA in Marketing from the same university in 1993. He is a Fellow of the Institute of Chartered Accountants of Nigeria and a former assistant director of the Fidelity Bank Plc.