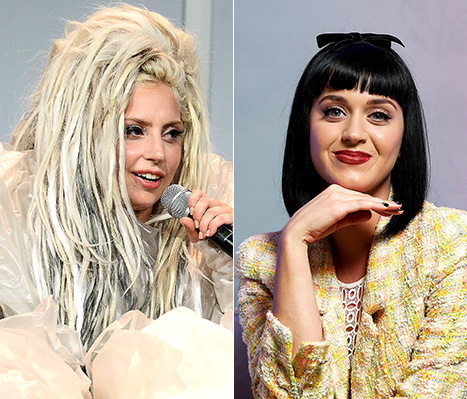 Lady Gaga slammed comparisons between herself and fellow pop singer Perry during her keynote speech at South By Southwest music festival on Friday, March 14.

She said, “I don’t know what the f–k-all I have to do with Katy Perry,” the “Applause” singer said onstage (via Billboard) at the Austin Convention Center in Austin, Texas. “Our music is so completely different. I couldn’t be more different, really. I really don’t fit in pop music in a way, but I came through it and I’d like to think I changed it in some way so you can feel like you don’t have to fit into a mold.”

Gaga, 27, and Perry, 29, have long been compared for their music, but have always denied any feud between them. “I really like Katy Perry and I like her fans,” Gaga told Ryan Seacrest back in August after her single “Applause” was released on the same day as Perry’s “Roar.”

Proving, perhaps, that she is different from Perry, Gaga gave a rather controversial performance at SXSW on Thursday, March 13. While on stage, the singer allowed vomit painter Millie Brown to throw up on her body. She then performed the rest of her concert covered in puke.

“I’ve known Millie [Brown] for I think like five years now and we’ve actually collaborated before . . . she was just in town and so we thought we would collaborate again,” Gaga explained of their collaboration during her keynote speech. “It was just exciting to see people talk about performance art on the internet. We really just did it because we believe in the performance and we believe in what it meant to the song.”

Gaga, however, did have one concern over the stunt. “I asked my publicist if she quit in the middle of the show!” she confessed with a laugh.