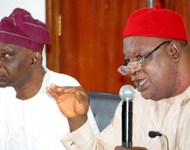 Dr Kunle Olajide from Ekiti State has been named to replace Chief Afe Babalola on the request of the elder statesmen as delegate to the National Conference.

This is contained in a statement signed by Sen. Anyim Pius Anyim, Secretary to the Government of the Federation, in Abuja on Thursday.

Similarly, Alhaji Ibrahim Yaro, the Etsu of Bwari, replaces Alhaji Ismail Mohammed, Sarki of Karshi, on the request of the National Council of Traditional Rulers of Nigeria.

The statement adds that Mrs Millicent Okoronkwo replaces Mrs Love Ezema, based on the request by the National Council of Women’s Societies of Nigeria.

“The nomination of Chief Chris Uche and Dr Sagir Maidoya to represent APGA is withdrawn to allow the party to resolve the issue of its nominees.

“Prof Layi Erinosho is nominated by the Academy of Social Sciences to fill the one slot allocated to the academy.

“The Governors’ Forum nominated Alhaji Mohammadu Goni from Borno to fill the slot for the North East Geo-Political Zone.

“The Delta Government submitted the name of Chief Isaac Jemide, while the Edo Government nominated Prof. Eddy Erhagbe to fill the vacant slot in their respective states.’’

According to the statement, former Presidents and Heads of State, the Leadership of Political Parties, the members of the National Assembly have been invited to attend the inauguration.

The inauguration will hold on Monday, March 17 at the National Judicial Institute, Abuja.

Delegates and guests are expected to be seated by 4 p.m.