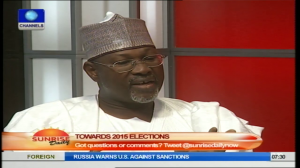 The Chairman of the Independent National Electoral Commission (INEC), Professor Attahiru Jega on Monday defended the time table released for the forth coming 2015 general elections.

The release of the time table for the polls, sent ripples into the political space with some political parties faulting the sequence and insisting on having the governorship elections before the presidential election.

However Professor Jega, who appeared as a guest on Channels Television’s flagship breakfast programme, Sunrise Daily noted that a lot of thought went into the process that produced the eventual time table.

Professor Jega went on to state that Political parties have the obligation to educate their supporters not to break the law and political campaign is when someone comes out to ask for votes.

“Political rally is one kind of political campaign. It’s basically a gathering of party supporters”

Professor Jega further noted that Nigerians “should expect good elections; we should expect better operational and logistical arrangements and we should also expect a peaceful election” in Osun and Ekiti states”.

He said the Commission “is doing everything possible; engaging stakeholders, preparing adequately on our own side to ensure that elections in Ekiti and Osun are very good elections with minimal challenges”.

“How did we change the sequence of the election? It is the same sequence, all we have done is to collapse the first two at the national level”, he said.

The professor of political science said the decision to hold the joint elections was in line with global best practices.

He commended the performance of the Commission in the conduct of the Anambra election insisting that “Anambra election was not as bad as it was made out to be. There was a lot of media hype about what happened in Anambra” which was capitalised on by “some aggrieved parties”.

He however said the Commission had admitted to their mistakes during the election and berated those who called for the total cancellation of the election.

“Mistakes were made, we identified our staff who was responsible for that mistake, we have taken him to court; he is been prosecuted” and “we have taken measures to rectify the irregularity. “We have re-scheduled the elections and the elections were conducted and it was added to the results of other places and it was announced” he said.

He also noted that the Commission has improved the training of its personnel- temporary, professional and adhoc- and have taken stock of “2011 elections and (we) know what we did right, what we need to retain, what we need to improve upon and we have been factoring all this into all the elections we have conducted” he said.

FRSC Says Relocation Of Academy From Jos To Enugu, Not Political