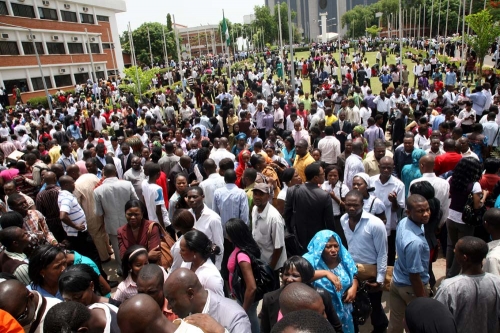 When the President, Dr. Goodluck Jonathan, announced in a live broadcast to Nigerians, that he was going to convene a Sovereign National Conference, I was among the vast majority of Nigerians who greeted it with enthusiasm. My reasons for supporting this planned national discuss weren’t farfetched, issues needed to be sorted out, we needed to get angry, talk about our grievances and most especially, reconcile our differences. The list of delegates earmarked for the National Conference has been released to the public, and after going through that list, saying I was disappointed would be an understatement—but I would rather understate than overstate, and in this case, overstating the facts which is tantamount to exaggeration, is quite unnecessary.
To be frank, the most important part of that list to me was the Socio-Cultural or Ethnic part of it. I immediately went right there, reading each name with care and diligence. I wasn’t trawling for a particular name; rather I was searching for a particular kind of name, a name that bore resemblance to arguably the most exploited ethnic group in Africa, the Ogoni’s. That name was missing, it was obvious, the Ogoni’s didn’t have a representative on that list, and in layman’s term, the Ogoni people aren’t going to be represented on the day the affairs of this country will be discussed, and the day people who’ve been oppressed will state their grievances.
It will be unfair to say that sentiments shouldn’t be brought into this issue, but I’ll be quick to point out that sentiment is one of the many factors that have contributed to the planned staging of this important conference. It would be necessary to refresh and remind everyone that when it comes to the Niger Delta struggle or the talk about injustice and repression, there isn’t a better synonym for oppression than Ogoni. This is a people who have had their sons and daughter murdered, their environment destroyed, to the point where the United Nations report on Ogoniland states that it will take about thirty years for Ogoniland to be returned to its past state. The fact that the Ogoni’s have always addressed the issues of injustice meted out to them peacefully, without carrying arms or detonating bombs, right from the days of the late Human rights and environmental activist, Ken Saro-Wiwa to the present set of leaders, should have made the organizers of this event make sure that the Ogoni’s are ably represented. The case is now different; the Ogoni’s have once again been shortchanged. They’ve been shortchanged maybe for their peaceful nature, they’ve been shortchanged because there’s no longer a Ken Saro-Wiwa to spearhead their peaceful cause and give it an international dimension, they’ve been shortchanged because they’ve drank too much of benzene infected water that they’re probably too sick to be allowed to speak. They’ve been shortchanged because they’ve bathed enough acid rain to cause them cancer, and cancer infected people are not needed when the conference finally holds.
I’ll be quick to silence the people who’ll want to be quicker by pointing out that a certain Justice Peter Akere whose name appeared on that list is an Ogoni man. It should be noted that there’s a huge difference between the Ogoni people having a representative, and the Rivers State Government sending an Ogoni man as part of the delegates to represent Rivers people. The former deals with an Ogoni person whose designated role is simply to speak on behalf of the Ogoni people he represents, he has the right to state our grievances and objections, our trials and tribulations, and most of all state our needs and what we’re expecting to gain from our participation in this conference. The later is much different, here Justice Akere is a representative of the people of Rivers State and his ethnic alliance has no meaning whatsoever. Here, his primary role is to speak for the entirety of Rivers people and push for their interest and satisfaction to be considered.
I’ll love to remind us that it’s been more than two years since the United Nations released their assessment on Ogoniland, and yet no meaningful step has been taken to ensure that the Ogoni people of Southern Nigeria have a better environment. The $30 billion asked by the UN to be earmarked for this project has also not been provided—nothing is too small to start with in the first place. Our rivers are still un-fishable, our rains are still acidic and a generation prone to cancer is been groomed. Our lands are still un-farmable, our periwinkles un-pickable. Our fishes are still un-eatable and our crabs un-catchable.
I love facts and truths, and whichever you choose; the Ogoni’s have contributed a whopping $30 billion to the Nigerian economy, which translates to about 4 trillion naira. If everybody was asked to pay for a chance to be represented, it is obvious that the Ogoni people have contribute both economically and with the blood of its sons and daughters to have a seat. The fact that the Ogoni’s have been a peaceful bunch shouldn’t and doesn’t mean they’re gun shy. The Ogoni’s deserve a representative; we’re a part of Nigeria too.
________________________________________
Article written by Saatah Nubari follow on Twitter @Saatah

Fredrick Nwabufo: We Are Boko Haram