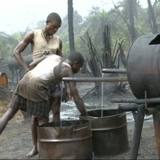 A statement issued by Col. Onyema Nwachukwu, Media Coordination of JTF in Yenagoa, said the anti-oil theft raids were conducted from Feb. 11 to Feb. 18.

Nwachukwu said that several items were seized during the operation in Rivers, Bayelsa, Delta and Edo.

He added that four pumping machines and one Lister Generator were seized at Warri South-West Local Government Area, Delta.

The spokesman said the troops also intercepted a locally made tug boat conveying 30 drums of stolen petroleum at Ajide on Benin River in Edo.

He said that six suspects were arrested during the operation and moved to the Tactical Headquarters of the Battalions for preliminary investigation.

He said two suspects arrested in the operation were assisting investigators at the Sector 2 of the JTF in Port Harcourt.

He said that the eight suspects would be handed over to relevant prosecuting agencies after preliminary investigations.

Related Topics:NigeriaBayelsaDeltaEdoRiversOil thieves
Up Next