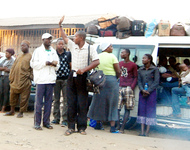 The Road Transport Employers Association of Nigeria (RTEAN) in Kwara on Friday urged the state government to ban selling and consumption of alcohol in motor parks.

The Chairman of the association, Alhaji Salman Ayoku, made the call in an interview in Ilorin.

He said the ban would dissuade habitual drunkards, restore sanity at the parks and reduce rate of accidents on Nigerian roads.

Ayoku, who said that the union had taken steps in the past to arrest the ugly trend, urged the state government to use its machinery to discourage the ugly act at the parks.

He said: “We are not comfortable with the way some drivers portray the association.

“It would be inhuman not to take passengers into consideration while driving; we are aware of the health implications of drinking and smoking. That’s why we are calling for measures to be taken on time.”

Related Topics:alcoholRoad Transport Employers Association of NigeriaRTEANMotor park
Up Next