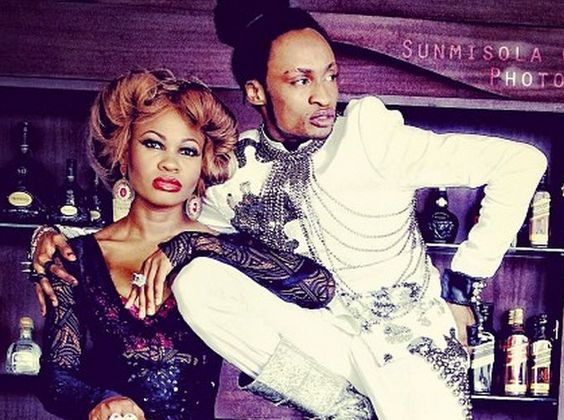 How time flies! It has been a year since late Nigerian female pop artiste, Goldie died in the arms of her best friend, Channel O VJ, Denrele Edun upon her return from the Grammy Awards.

Denrele has penned a very emotional tribute to his late bestie, one which will bring tears to a lot of eyes.

“A friend who dies………it’s something of you who dies.
Trying to figure out what to write today has been one of the most draining and difficult things I’ve ever had to do and what I realized is that these mechanisms of my body, mind and language are too ill-equipped to portray with justice the gravity of the loss that I feel.

Goldie Harvey was my soul mate. Everything about Goldie was unique. Everything about Goldie was complex. She wasn’t only beautiful, she was so captivatingly beautiful in and out that no eye could avoid her, and once she had hooked you with her charming innocence, you were blown away by a beauty that was at once shy and confident, sultry and innocent, inviting and biting and as such, I always described her as a Siren of Sorts! 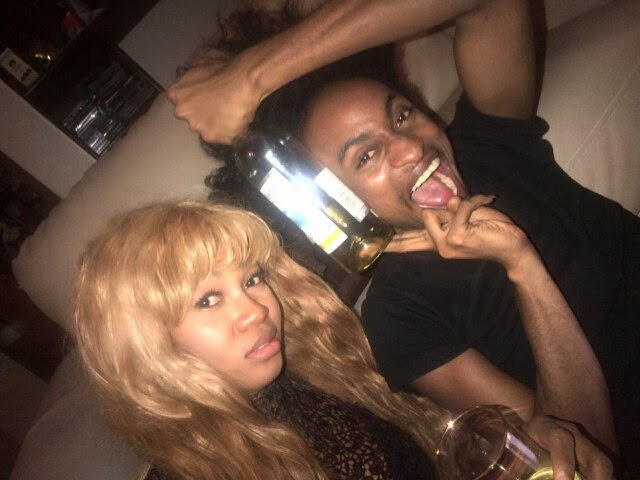 I used to tell my friends, “Wait until you meet my personal person Goldie, you go love am die.” And I was never proven wrong. We have all been in love with Goldie Harvey.

When I met her, I was blown away by the bizarre and beautiful world that was wrapped up in this tiny whimsical creature.

It was sometime in early 2006; I got a call from a certain Bimpe who wanted to shoot two musical videos in a row. (At that time, I had featured in D’banj’s “Why Me” and was already crowned with the invisible sash of “Most-Sought-After-Video-Vixen” as every artiste believed a cameo appearance from me would not only boost the ratings of the vid but also garner enough airplay from the station I used to work with). 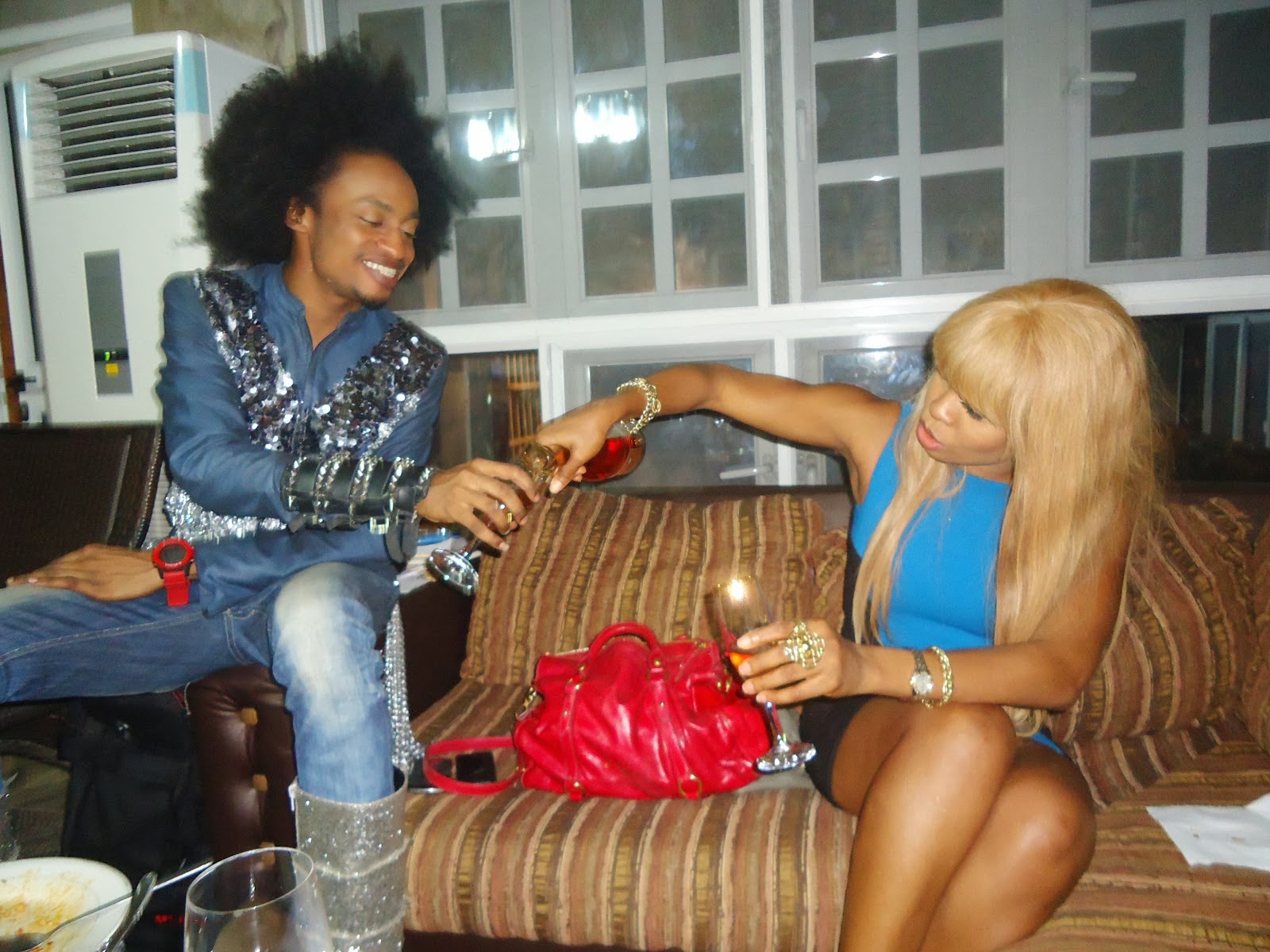 I thought to myself, “Another feature? Na wa!”.

In usual artistic fashion, I kept posting this “Bimpe” until I got another call from a Damilola (who happened to be Bimpe/Goldie’s PA at that time) asking for a meeting. Why not? So right after work, I decided to stop by at this person’s residence somewhere on Etim Inyang street in V/I.

Lo and behold, every female artiste who was a friend of mine was in the building!! Never one to say no to a party, I thanked Baba GOD for making my toothpick legs waka well. I also ran into Seyi Brown (we used to model for the House of KeseJabari in my hey days) and it looked like the house party was in full swing. 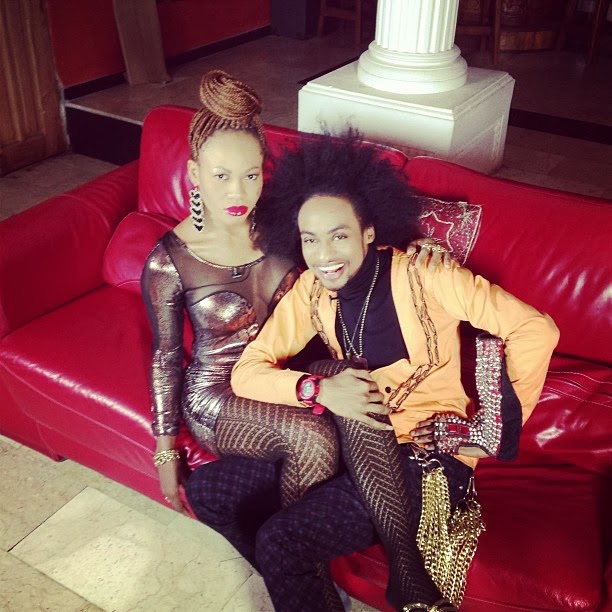 “Where is Bimpe ooo??” I kept screaming. And there she was, sprawled on the couch and looking a little pale.

“HA, wetin happen?” I asked and she motioned for me to sit next to her. Headache, she gestured. Amidst the chaos and chattering all around the house, she poured me a glass of white wine (which later became our favourite drink) but I declined.

“Just a glass. See it’s the one I’ve been drinking from”

“I’ll rather watch you drink” and then she gave up on me.

“So you asked to see me?” (Me no like to dey waste time. I was eyeing the pastries in the corner of the living room).

“Oh, I’m shooting a new music video. Track is titled “Spin Me”, DJ Tee is directing and I would like you to make a cameo. You were amazing in “Why Me” and Abeg I need your Rockstar self to sell my market in this video. So what would you charge me?”

I thought for a minute. ”Can I listen to the song first?”. 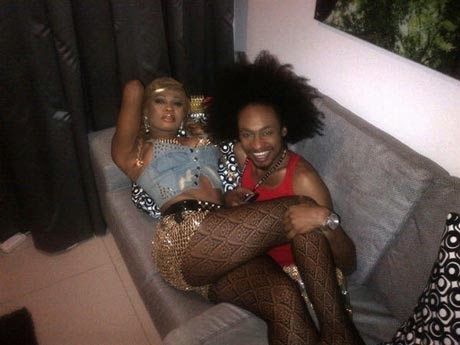 Then she took out her phone and typed 50k and showed me. Omo mehn, I was shocked! 50k gees at that point was good cool cash. Heck, I was earning 65k per month at work and it was strenuous work Monday to Sunday.

But there was something vulnerable about this girl and without thinking, I blurted out “You know what? Don’t worry about the cash. I will do it. When and where is the shoot plus what are you wearing so I can match up with you?”.

Now it was her turn to look shocked. She sat up sharply despite her heavy migraine and looked me in the eye. “You are kidding me. Denrele be serious jo”.

I stood up and said, “Get Damilola to call me with details of the shoot. My madness is good to go. I’m hungry, I wan chop cake.” And so I waltzed round the room, mingled with my people, foil-papered serious take away, grabbed some promo CDs and left. I went back to the office (I used to sleep at the office then), listened to the song over and over and fell asleep on my desk

The day of the Video shoot; I was late as usual, Goldie was freaking out, DJ Tee was being DJ Tee and I had to play a right handed guitar for the opening sequence. Despite my left handedness, I pulled through but not without bruising my fingers badly. I was bleeding all over the place. Goldie was so worried, she tore out the netting under her dress and tied my fingers so the bleeding could stop. Needless to say, the shoot was a success and I made a new best friend!

Fast Forward to 2010 and I became Goldie Harvey’s alter ego in all her videos!!

Never in my wildest dreams did I ever expect for her to leave so soon- her wonderful voice only a phone call away, her smile that would light up a room in seconds, and her warm heart that could melt a glacier.

She was a jewel that shone across oceans into the hearts of so many.

She was an adventurer, ready to hop on a plane in a heartbeat and experience life to the fullest.

She was a gifted artiste who could weave a song that left you breathless and laughing out loud.

She was a friend who offered encouragement when you needed it most.

She was my long lost sister who opened up a whole new family for me that time and distance will not deny.

When I think of what she accomplished, my heart soars with pride and I feel gratitude that yes, you can accomplish your dreams.

We openly shared our dreams and secrets- Goldie and I- and what I admired the most was her genuineness and style- taking risks, stepping out of her comfort zone, offering her advice and knowledge to total strangers in an effort to empower their hearts and lift their spirits.

Now she is free to work even more miracles from the other side.

I lift my heart to her in honor, and with joy, knowing that she is finally free. And if I experience just a tiny drop of the happiness she feels now, I will consider myself so fortunate to be alive.

So fortunate also to have mended fences when we clashed severely. Right after her “Jawo Jawo” video shoot, Goldie and I fell out heavily. We had finished shooting a couple of scenes at Zizi Cardow’s showroom and I noticed a change in her behavior. Because I was heavily involved onset, I felt she was unappreciative.

On the other hand, she didn’t find my humor appealing. She took some of my jokes in bad taste and then, we didn’t speak to each other for three months! But there was a bond; I found myself marching to her house and we had a shouting match that lasted for close to four hours. Exhausted from the ordeal, we sat back and laughed our differences off.

I recall Ilami Precious (who had just won the NextMovieStar at that time) sitting quietly and observing us. After then, we grew even closer than ever!

People often speak of happiness in tragedy. The most important thing Goldie taught me was how to be a friend. She was a good friend to everyone she loved, even those who at times she found impossible to like.

She was friends to some simply because she felt that they needed her to be. Goldie would give you fuel money, buy you lunch, give you a place to stay if you had nowhere else to go, or even fight a fight that she couldn’t win.

If I needed anything, Goldie would do everything she could to help me. She always knew when I was hungry or broke and always bought me the most amazing gifts. Just an hour before she passed on, she gave me a Hermes perfume she got for me in the States and told me, “When I was passing Hollywood Boulevard, this scent hit me and I thought of you immediately.”

She always came home crying every time she heard someone say nasty stuff about her to other people or even print unprintable things about her. Comments on blogs and social media always got to her however dis-interested she tried to act but I could see through that facade. She even told me about a couple of Industry heavyweights that were getting to close for comfort but we always laughed that off. “You are hot stuff nah. Enjoy the attention”……I told her.

Honestly, every life is like a book. Some are long. Some are short. And, I remind myself that a long book doesn’t always mean that it’s a good book. Some long books- and lives- are filled with pain, bitterness and sorrow. Maybe it’s a long life that is void of love. Goldie was going to be one of those great, yet short books.

The kind that hits your heart with every page of every chapter. And just when it’s getting really good, you find yourself on the last page. Desperately wanting more. And so incredibly moved by all that you’ve absorbed.
Well, it’s been a great book Goldie.

Every word.
Every page.
Every story in every chapter.

RE: Life does go on and we should celebrate. Hopefully, we will all leave behind people that love us and have wonderful stories to share about us. How are YOU living your life??