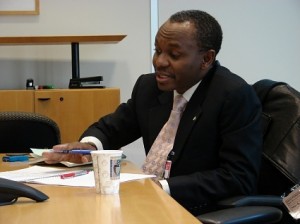 Malam Nasir El-Rufai is a saint. El-Rufai’s intellectual and managerial wisdom is unmatched by any living thing that has ever been in power in Nigeria.

Those are the things we discover in his memoir, The Accidental Public Servant. TAPS is not only a celebration of an individual’s narcissism but a revelation of the destructive elitism on whose back this polarised nation suffers. But because TAPS documents the political tragedies we have witnessed since the coming of this present democracy in which the author was a privileged actor, we must repaint our triumphal arch to welcome this confession of an insider.

I won’t advise any hypertensive person to open the book, if not for the author’s inability to contain his large ego in this overtly expressive tome but for his exposé of the financial scams and abuse of power by the political elite who, despite declared differences and public opposition, are actual friends and family in the closet. El-Rufai reveals, somewhat unwittingly, that Nigeria is just a chessboard on which the masses are manipulated and taken for granted.

In TAPS, there is President Obasanjo who wants to overstay, the lawmakers who abandon their duties and scramble for complicity, General Babangida who is just an expired buffoon, Nuhu Ribadu an unreliable confidant who is also an unprincipled anti-corruption crusader and Atiku Abubakar who is a smooth criminal—everybody wears the garb of a devil in this book. One, though, hears a man too angry, as an opposition party member, to be decorous.

El-Rufai has guts, and he is really arrogant about his illusory intellect and academic exploits. He makes everyone around him, including his boss Obasanjo, seem dumb as he keeps screaming about his A-grades at Barewa College where the late President Yar’Adua whom he portrays as unserious student and chain-smoker managed to leave with good grades which seemed to have shocked El-Rufai. It doesn’t matter that El-Rufai didn’t even meet Yar’Adua at the school.

Similarly, the literary prowess which he plays down in his major case of condescension in the book—with a claim that he was better with figures, as though he had propounded a mathematical theory—was later overblown in his boast that he wrote a speech “single-handedly” for the then military Head of State General Abdulsalam Abubakar. He never lets you forget he graduated with a first class honours degree; perhaps that is because he is the only one who has ever done so? Nor does El-Rufai fail to remind you that he is a penniless Ghandi who, after his notoriety as FCT Minister, couldn’t afford a stay in Dubai. He could only afford having his children at elite schools in Maryland and London.

TAPS is built on a diseased mindset. It romanticises the author’s intellectual wisdom as the flight that conveyed him to our cloudy political sky. But there was no accident in El-Rufai’s public service career; the author is just too dumb to recognise nepotism for what it is. What he optimistically calls an accident was in fact an invitation from his elder brother’s friend to serve as a member of the advisory council in General Abdulsalam’s transition government. Let us examine El-Rufai’s own words:

“I subsequently learnt from a mutual friend that (General Abdulsalam) Abubakar had remembered me because I had met him a couple of times in the course of my quantity surveying career and MAY HAVE (emphasis mine) debated the role of the military in politics and governance. My GUESS (emphasis mine) is the Head of State THOUGHT (emphasis mine) he needed contrarian views to enrich his policy decisions… (p. 53)”

You don’t need a language tutor to see through the lame excuses and reasons given in the excerpt above, especially the self-indicting words in upper case: There was an unnamed mutual friend who revealed what had escaped the author’s memory; and in the use of “may”, El-Rufai, who remembers page-long dialogues, is clearly being economical with the truth.

Note that El-Rufai bases his reason on a conjecture by the use of “guess”, pondering the so-called accident that earned him a slot in that team. So you may be eager to know how he guessed a man’s thought. General Abdulsalam didn’t say it. In Nigeria, we know that political opportunism is facilitated by ethnic, religious and regional cronyism. Yes, you only need to be member of a certain group to make it to that cycle!

And as a member of that team, El-Rufai justifies his own brand of “cronyism” on recommending for ministerial appointment a man whose eligibility was built around what El-Rufai too calls “rumour mill”. The nominee, a suspended Deputy Governor at CBN, Alhaji Ismaila Usman, whom El-Rufai claims he had met just once, was rumoured to have refused to be an accomplice in a financial scam ordered by the late General Sani Abacha. This selection criterion, which is exactly the practice that brought El-Rufai too on board General Abdulsalam’s transition government, is an undeniable nepotism.

I always campaign for right to expression and even recently have written to defend El-Rufai from his political antagonists on the alleged blasphemy accusation and other matters. I had maintained that his past in public service must not be allowed to be used to deny him a right to political activism.

But TAPS is an explosion of that egalitarian utilitarianism on mine and the outrage of that belief is a welcome development from me, in my barricade amongst the citizens of common sense. Our resolve now as citizens is to study and challenge what elitism does to this country. The arguments in support of El-Rufai’s elite-aggrandising policies while he was FCT Minister fail anytime we have a gander of the effects they had on the common people of Abuja, especially the “subaltern” residents who were never compensated, whose lives were destroyed by that insensitivity to our socioeconomic structure.

There are only three saints in El-Rufai’s book: His late daughter Yasmin, elder brother Bashir and the countless people he introduces as “mentors”. But any attentive reader would understand that El-Rufai who couldn’t resign in a government known for reigns of corruptions, despite his unsuccessful attempts to justify his stay, is apparently suffering from Out-of-Office syndrome. His portrayals of Yar’Adua, especially when he engaged the services of foreign lobbyists to make Yar’Adua appear like a military leader, betrays the honesty of his activism.

The El-Rufai who afforded such media stunts wasn’t broke as declared in this memoir. That politics is too cheap for Nigerians. The trick in this new turn of El-Rufailitics is to wallop his fellow members of the elite class just to earn the sympathy and trust of the “Suffering Class” and, more importantly, the Twitter-based youths many of whom only think that Nigeria is just the size of their blogs. One thing El-Rufai fails to acknowledge is: Though a crocodile may stay with a community of alligators, it can never become one. May God save us from us!