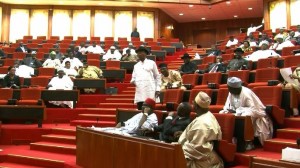 Sen. Enyinnaya Abaribe, the Chairman, Senate Committee on Information, Media and Public Affairs, says the Senate is not aware of any formal notice of defection from any senator.

Abaribe spoke in Abuja on Tuesday while reacting to a claim that some PDP senators had written to the Senate on their intention to defect to APC.

He said that any correspondence not read on the floor of the Senate was termed as personal and not an official letter to the assembly.

Abaribe explained that the process for defecting from one party to another was clearly spelt out in the constitution.

“The Senate, officially, is not aware of any letter about senators defecting because any letter that comes to the Senate will be read on the floor.

“They have not written it for reading on the floor of the Senate,’’ Abaribe said.

According to him, the process for anyone to move from one party to another is very well stated in the constitution.

He said, “the process is open, clear and not in a way that can be misunderstood in anyway.’’

He said that a senator who intended to defect to another party was expected by the law to formally intimate the Senate of his personal decision and not through a joint letter.

Abaribe emphasised that the Upper Chamber would only respond when a senator formally informed the Senate of his intention to defect to another party.

He said that the upper chamber of the National Assembly would only respond after an individual senator had forwarded an open letter to the Senate.

“Don’t forget that every senator did an election on his own. There wasn’t a joint election. So senators can’t write a joint letter to the senate president about their defection.

“It must be individual and every person who has to leave for whatever reason will have to state his reason and also do it personally.

“And until we see that, we assume that nobody is yet to go anywhere,” Abaribe said.

Sam Nda-Isaiah, Leadership Publisher Declares For Presidency On The Platform Of The APC

PDP Will Not Anoint Candidates For 2015 Elections — Adamu Mu`azu