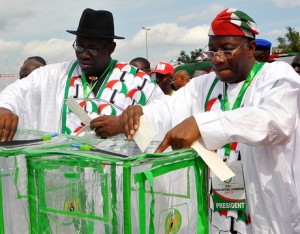 PRESIDENT GOODLUCK JONATHAN (R) AND GOV. SERIAKE
DICKSON OF BAYELSA CASTING THEIR VOTES AT THE PDP SPECIAL
NATIONAL CONVENTION IN ABUJA ON SATURDAY (31/8/13)

Day by day it is becoming clearer that Nigerian President, Dr. Goodluck Ebelemi Jonathan may not be returned to his position if he decides to re-contest in 2015. You can take this to the bank. Here are my reasons. The first reason is that the end of the intra-party crisis in his party, the People’s Democratic Party (PDP) may not be in sight soon. The President’s grip at the National Assembly has also considerably weakened by the current mass defections of legislators to the All Progressives Congress (APC). The second is that he cannot boast of the landslide votes that he got in 2011 in his home region of South-South and South-East or even the South West. With the continuous insurgency in the North-East and the ineptitude of the Independent (some say partly dependent) National Electoral Commission, there is even a chance that the elections may be marred by violence and may be inconclusive in some parts of the North. The third is that with some controversial moves like signing the anti-gay bill into law, global sympathy for his government has eroded considerably as many groups pro-gay groups brace up to campaign for sanctions against his government. The fourth is that with the Petroleum Industry Bill (PIB) still neglected, the President has confirmed his reluctance to reform oil and gas industry- the key sector of the Nigerian economy. Under his reign, anti- corruption reforms have seized to receive priority with unpleasant repercussions from friendly nations.

But there those who think otherwise. They insist GEJ will make it back in 2015. They cite the President’s incumbency factor and enormous capability for political patronage. They have also pointed to the fact that he controls the security apparatus including the police and the military and could easily get them to do his bidding. The President just retired many senior officers to pave way for his Ijaw kinsman to take over the military command. The bunch of ex-militants constitute volunteers(some say stand by army) readily available to do President Jonathan’s bidding. The officials of the electoral umpire in Nigeria (INEC) are said to be allegedly disposed to do the bidding of the man who appointed them to office. Though the current has commendably tried their hands in giving some facelift to many airports in the country, the assessment of work done so far does not come anywhere close to the touted transformation. Jonathan’s administration has also began reforms in the power sector. However pundits say that it will take a few more years for the dividend of the reforms to be visible to the public. Other observers are less optimistic and insist that what the reforms did was to hand the sector back to the same people who have long benefited from the rot in the sector. Another reason that may work in the favour of the President is the fact opposition party, the All Progressive Congress (APC) is yet to organise and market itself to Nigerians as a credible alternative platform. The APC is yet to charm Nigerians as a substitute political platform that will do things differently and fulfil the yearnings of the Nigerian masses. Rather they keep parading old faces like Mohamadu Buhari, Bola Ahmed Tinubu, Bisi Akande, Tom Ikimi, etc, which may turn out to be their greatest undoing. APC needs to bring a Presidential candidate acceptable to a wide spectrum of Nigerians.

The protracted intra-party crisis in the ruling PDP have come with consequences that makes the return of Jonathan slimmer. With the House of Representatives comfortably in the hands of the opposition APC, the fate of the Senate is shaking as up to 19 Senators may leave to APC in the next few days. The public exchanges between former President Obasanjo and President Jonathan means that they might have parted ways even though they remain in the same party. With the forced exit of former Chairman Bamanga Tukur many feel that the elevation of Obasanjo’s associate Muazu is meant to pacify him. No one can predict what will happen if Obasanjo regains his influence within the party especially about his alleged indisposition towards supporting a Jonathan candidature. Now let us imagine that the Presidency will have their way and arm-twist the PDP to adopt Jonathan as a consensus candidate for the 2015 election. This is what the numbers look like at the moment if we look at the results of the 2011 elections and attempt to cautious extrapolations. In the last Presidential elections, the PDP scored 22,495,187 votes nationwide. State scores are as follows: Rivers 1,817,762, Adamawa 508,314, Kano 440,666, Sokoto 309,057, Kwara 268,243, totalling 3,344,042. Which means that with the movement of the five governors to APC, the ruling party is at risk of losing 14.8 percent of the votes they got in 2011. Another 542,173 votes may be lost in Edo while 1,381,357 votes are at risk in Imo State, which will take the percentage of votes at risk to 23.4 percent. Even with the most generous estimates, it is near impossible for the PDP candidate to win 25 percent in two thirds of the thirty-six states i.e. twenty-four states, to be duly elected.

On a related note, the poor outing of the INEC in the just concluded gubernatorial elections in Anambra state has cast a shadow of doubt on their neutrality and professionalism as an electoral umpire. Officials of INEC were allegedly involved in actions that gave the incumbent party an undue advantage over other contestants. With the complacency, and some say collusion of security agencies, attacks have continued in many states of the North where there is currently an emergency rule. So far many innocent lives have been lost and countless military installations have been successfully destroyed. INEC had announced that it may not conduct elections in such states. The implication of this is that some eligible voters will be disenfranchised and the President may be elected by some zones and not by others. In a related development, the Chairman of INEC had announced that government will not provide security for election monitors insisting that those interested in monitoring elections in 2015 will have to provide their own security. With heightening insecurity in states like Rivers where an allegedly partisan police have looked elsewhere, one will imagine that electoral violence is very likely. Recently, political rallies have been disrupted by hoodlums allegedly sponsored by politicians loyal to the ruling party. It is believed that the interference in political rallies is part of a well-rehearsed plan to suppress growing opposition in the state.

As the domestic political uncertainties about the unlikelihood of the electoral victory of the PDP in Nigeria continue to play out, what might have nailed the final coffin internationally might be the recent Presidential accent to anti-gay law. Opinion is divided about this in-country, however many international human rights organisations have condemned the law. Pro-gay organisations have started mounting campaigns to isolate the Jonathan administration. With very important bills like the Petroleum Industry Bill (PIB) still pending at the National Assembly, many people wonder that the speed with which the anti-gay bill was asked was just to take away attention from very critical bills like the PIB. Many observers opine that the indifference towards the PIB by Jonathan Presidency is due to his reluctance to pursue transparency in the oil and gas industry and to open up the National Oil Company which is said to be the centre of the patronage ecosystem for the ruling party, with 10.8 billion dollars still missing. Many international friends of Nigeria and prospective investors are worried that the high tolerance of corruption by the Jonathan government may force them move to other new oil producing countries for their investment.

With all of these factors staring the electorate in the face, President Goodluck Jonathan will find it extremely difficult to muster sufficient goodwill that can be translated to electoral victory both for him and his party, the PDP in 2015. It is a tough battle ahead. However, all hope is not lost. With the APC still looking like an association of strange political bedfellows, few conclusions can be made in a country where public resources have been creatively deployed in the past to buy votes and change electoral fortunes overnight. The battle is not over until it is over. Still, some say PDP can still retrace their steps and pull a fast one for the President.

Same Sex Marriage: Who Be Government Teacher? By Reno Omokri