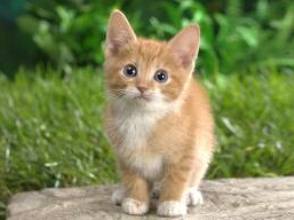 A middle-aged woman (names withheld) yesterday in Lafia, Nasarawa State, publicly disowned her cat whom she had kept as a pet for seven years for what she termed “an unnatural sexual behavior” which she finds disturbing and “a contradiction of the laws of nature.”

By this, the cat has made a record as the first cat to be so publicly declared gay and disowned by its owner.

The cat, named Bull, was alleged to be in the habit of making sexual advances only to other male cats in the house even though there are several other female cats.

Neighbours attested that none of the other cats born while the cat was in the house has it’s due colour, lending credence to the fact that it has not been able to mate with other female cats in its home or anywhere in the environ.

The cat owner who expressed a strong belief in the divine purpose of creating male and female of every creature to fulfil an ordained purpose of procreation said, “anybody interested in this gay cat can have it because I have no further use of it.”

The cat’s renunciation which attracted members of the public was however dramatic as no one wanted to take ownership of such a cat.

After its rejection, many residents of the area have been the onging the house located on Gboko Street, Tudun Gwandara area of Lafia, the state capital to see things for themselves