As I boarded a bus to work last week, the driver announced that he didn’t have any change for anyone with N500 and more, so he expected everyone had the right amount: N50. The woman beside me promptly got up and left the bus. I presume she didn’t have any smaller denomination either. Since I moved to Lagos, I’ve taken into cognizance the effect of not having ‘change’ on transactions. Although it might seem unremarkable, the issue of ‘change’ significantly affects the success rate of a myriad of transactions; especially those at Small and Medium Enterprise levels. Might I be exaggerating the effects? No. Not when one aggregates these effects to a macro-level. Let’s get to these effects.

First, as illustrated by my anecdote, the issue of finding ‘change’ creates a wedge in business transactions. It halts the exchange of goods and services. The seller’s willing to supply the commodity, the buyer’s also willing and able to purchase, but the deal never goes through…cause no one’s got change. To illustrate the net effect of this scenario, I’ll use simple demand and supply curves.
Diagram 1 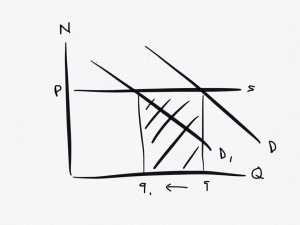 For those who have no recollection of such curves, I’ll explain. Our supply curve (S) is horizontal because no matter how much demand comes, the supply isn’t going to drastically change. The bus driver will still have a set number of seats irrespective of the demand; the groundnut (peanut) seller will still have one tray of groundnut to sell and the ‘pure water’ guy will still have a bag of water to sell. The demand involuntarily falls from D to D1 because some of the buyers can’t pay for the products with their N1000 or N500 notes. Consequently, the quantity of goods sold falls from q to q1. The shaded region indicates the seller’s lost profit. That’s never a good thing.

Interestingly enough, the issue of change might have a smaller counter-effect of increasing the exchange of goods and services. In scenarios of ‘change deficiency’, people end up buying more than they originally planned to. Most of us have experienced cases where we have to buy another bottle of coke or plate of rice because the seller didn’t have change. In spite of this counter-effect, the aggregate net-effect would still be a reduction in commercial activity.

Moreover, buying more than one bargained for also constitutes waste and misappropriation of scarce resources. It might mean reallocating money to less useful goods. Moreover, buying a N300 plate of rice when your appetite-capacity is N100 constitutes a reduction in utility. After the 100 Naira point of satisfaction, one’s marginal utility of rice plunges to zero. As he forces himself to finish the large 300 Naira plate of rice he unwillingly purchased, his utility takes on a negative value. Every spoon of rice he shoves into his mouth is no longer rewarding, but rather feels like a punishment. I can’t count how many times I’ve been in such a situation.

Also, you lose money when you decided to leave the remaining ‘change’ with the corn seller or taxi driver. Some of us don’t mind, but frankly, a lot of us do. Having no spare change on you gets incredibly expensive when you run into those pesky Abuja policemen who cajole you to ‘betta’ their night…and all you’ve got is a N1000 note.

I’m not even delving into the issue of time wasting that also happens when the seller’s trying to find change and you’ve just got to wait and wait…for N200. The time spent looking for change, you could be somewhere else doing something more productive and the seller could be selling another of his/her product to someone else.

This might seem obvious, but money only holds value if it can be spent. For example, it’s like holding a legitimate form of currency in a different country. In spite of how internationally recognized the dollar is, it can’t be used to buy ‘Suya’ from the Mallam at the street side. To get its true value within that context, one would need to convert it to Naira: same with the issue of change. No matter how valuable or recognized your N1000 is, if you plan on buying ‘pure water’ from a street vendor, you would need to either change it to lower denominations or hope he has change and is willing to part with it.

Such emphasis on holding change explains why sellers and buyers jealously hoard their N50 and N100 notes. Ironically, such behavior reduces the amount of small denominations in circulation and only worsens the situation.

Fear not, a market solution might exist. One could create a market that corrects for this wedge in transaction and simultaneously creates revenue, i.e. a derivative of a currency-exchange market where conversion of foreign currency to domestic currency is based on a certain rate. When you go to convert money, the money changer charges you when he converts your legitimate, but useless money into legitimate and useful domestic currency. Likewise one could charge for changing high denominations to smaller denominations. Perhaps, charge N20 for every N500 converted? I’ll leave the entrepreneurially-minded to take care of the logistics or feasibility of such a market. Wait…or maybe the Government should just print smaller denominations in place of the larger ones. On the bright side, pause for a second and imagine how much worse the ‘change’ situation would have been if the plans for N5000 notes went through.

Am I the only one who finds the issue of ‘change’ really stressful or is it all in my head? Or perhaps I need to get richer so I’ll be able to say cool ‘rich people’ remarks like “Keep the Change”. Let me know what you think in the comments.

No Cause For Alarm! NNPC Must Account For Missing $10.8 bn, NOI Assures Nigerians