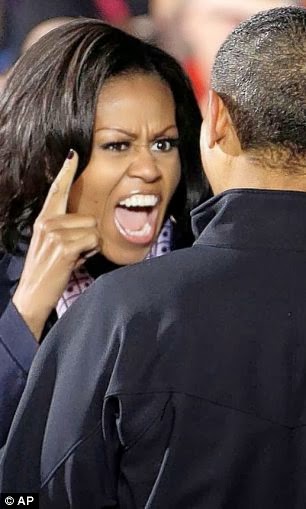 Michelle Obama was 50 yesterday and President Barack Obama will be feting his redoubtable First Lady tonight with a party that will give them the chance to let their hair down and forget their troubles for a few hours.

The email inviting guests to the ‘snacks & sips & dancing & dessert’ advised them to wear comfortable shoes and practise their dance moves.

Purse-lipped Washington etiquette experts have tutted at the informality of it all, but the Obamas have always been keen to appear accessible, even if the stand-offish reality is somewhat different.

The Obamas are the world’s most scrutinised couple at the best of times, but it will be rare to find a guest at the bash who won’t be secretly watching them with particular interest.

After all, the last time they were pictured together — at Nelson Mandela’s memorial — the First Lady was looking none too pleased as the her husband posed for a ‘selfie’ photograph with the leggy blonde Danish Prime Minister, Helle Thorning-Schmidt.

Indeed, if the U.S. tabloids are to be believed, the relationship of Washington’s golden couple is facing problems that go far beyond dirty looks.

Under the headline Obama Divorce Bombshell!, the National Enquirer claims their 21-year marriage has dissolved in a string of ugly fights that were prompted by the Mandela memorial incident and — far more outrageously — Mrs Obama’s discovery that Secret Service bodyguards had been covering up infidelity on her husband’s part.

It’s an allegation the White House has declined to comment on, though after Bill Clinton’s trouser-dropping scandals, Americans would be rather less sanguine about any extra-marital activity than the French appear to be over President Francois Hollande’s behaviour.

Mrs Obama, the Enquirer claims, intends to stand by her husband until his presidency is over, at which time he will move back to Hawaii, where he grew up, and she will stay in Washington with their children.

For the moment, they are allegedly sleeping in separate bedrooms after Mr Obama’s attempt to ‘mend fences’ backfired so badly on a recent Christmas getaway to Hawaii that he returned to Washington with their two daughters, leaving his wife behind.

The National Enquirer, it must be said, quoted only anonymous insiders in support of these sensational claims, and is hardly the most reliable source of hard news.

Obama advisers are certainly not talking as if there is any scandal in the offing.

The couple are ‘role models for parents all across the country’, according to old friend and adviser Valerie Jarrett. ‘She’s at the top of her game. She’s fabulous at 50.’
Washington’s media has ignored the story.

But everyone remembers how the Enquirer famously got it right when it claimed the supposedly squeaky clean Democrat presidential contender John Edwards had fathered a love child by a former campaign worker.

Thin as its story may seem at the moment, might it be on to something again?

At least it was right on one point — Mrs Obama did remain in Hawaii. The White House quickly offered an explanation, saying the extended stay had been a birthday present from her husband.

‘If you have kids, you know that telling your spouse they can spend a week away from home is actually a big present,’ said his spokesman.

Before returning home on Wednesday, Mrs Obama holed up for more than a week at TV star Oprah Winfrey’s spectacular 12-bedroom house on a mountainside estate on Maui, the second largest of the Hawaiian islands.

Oprah has described the estate as a place where she and guests sit on the porch sipping guava cocktails, and ride horses to the top of the mountain to watch the sun go down.

Why would anyone rush back to chilly Washington from such an idyll?

But if the rumours are true, and there were more painful reasons for Michelle’s reluctance to rejoin her husband, this would not be the first time such tensions have apparently surfaced.

Since he was elected President, two books have claimed the couple came close to splitting in their early years together, with Mrs Obama even drawing up divorce papers after deciding his burning political ambition was ruining their chances of domestic happiness.

‘There was little conversation and even less romance. She was angry at his selfishness and careerism; he thought she was cold and ungrateful,’ wrote Wolffe.

At the time, Mrs Obama had only recently become a mother — their daughters Malia and Sasha are now 15 and 12. Her husband, whom she had met while they were both working for a Chicago law firm in 1989, was a mere State Senator in Illinois who had just been thrashed in a battle for a seat in Congress.

‘She hated the failed race for Congress in 2000 and their marriage was strained by the time their younger daughter, Sasha, was born,’ wrote Wolffe in Renegade.
Wolffe noted, though, that they seemed to have got over their past issues by the time they made it to the White House.

‘We’re going to be fine,’ he quoted Mrs Obama as saying. ‘We’re strong enough to take anything on and be OK at the end.’

Yet, according to some accounts, Mrs Obama didn’t take well to Washington life.

Former French First Lady Carla Bruni revealed in a book how she had asked what life was like there. ‘Don’t ask! It’s hell. I can’t stand it!’ Mrs Obama reportedly told her. Mrs Obama later insisted she had never said that.

In 2012, meanwhile, political writer Edward Klein claimed Mr Obama had become so depressed about his failing marriage in 2000 that friends feared he was contemplating suicide.

Mrs Obama had been furious because she had warned him not to fight the disastrous Congress election battle which he lost, said Klein.

‘During the dark days that followed his defeat, he turned to Michelle for comfort. But she was in no mood to offer him sympathy,’ wrote Klein, who claimed Michelle’s friends told him she had even drawn up divorce papers.

‘He had dashed Michelle’s hopes of creating a stable and secure future,’ he wrote. ‘As a result their marriage was on the rocks, and Obama confided to friends that he and Michelle were talking about divorce.’

Could the couple have reached such a crisis again?

In an interview published to coincide with her birthday, Mrs Obama provided glimpses of a woman who — after devoting years to her husband’s career and raising their children — now feels ready to put herself first.

The formidable and often forthright First Lady, who has routinely been portrayed as the one who really wears the trousers in the Obama household, says she wants to be more like her mother.

‘She does exactly what she wants to do every single day without apology,’ Michelle said.

Long an icon of wholesomeness with her campaigns for regular exercise and healthy eating, Mrs Obama even admits she wouldn’t rule out plastic surgery or Botox to keep her looks: ‘Women should have the freedom to do whatever they need to do to feel good about themselves.’

Her life is ‘ever-evolving’, she says, adding: ‘I’ve got to keep figuring out ways to have an impact.’

Her husband knows the feeling. He must wish the rumours of marital strife were the only cloud hanging over the big party.

For the truth is that the promise of the most anticipated presidency since that of John F. Kennedy has long since dimmed.

Mr Obama’s popularity rating is just over 40 per cent, with two-thirds of voters saying the U.S. is heading in the wrong direction. Only the Watergate-plagued Richard Nixon was doing worse at this stage of his time in office.

After winning a second term from unenthusiastic voters, largely because his Republican opponent Mitt Romney was so uninspiring, Obama spent much of last year making many voters contemplate the unthinkable: perhaps even Romney would have been better.

Obama recently joked that if the Washington press is to be believed, his presidency has suffered ‘15 near-death experiences’.

The disenchantment of even some of his most senior deputies has now been forcefully revealed by his former Defence Secretary Robert Gates.

In an incendiary autobiography, Gates portrays Mr Obama as dangerously aloof, arrogant, naïve, indecisive and a worryingly detached ‘commander in chief’ who has no passion for his nation’s armed forces.

Whether forging policy on Iraq or Syria, Obama ignored his military commanders but then rowed back on his promises — such as that ‘red line’ he set over Syria’s use of chemical weapons — when it suited him.

Gates admits being ‘deeply uneasy’ with the Obama administration’s ‘lack of appreciation, from the top down, of the uncertainties and unpredictability of war’.

Hardly a ringing endorsement for the leader of the free world.

And this week, Gates’ icy verdict on his old boss was echoed by another defence insider.

Sir Hew Strachan, an adviser to the Chief of the Defence Staff in Britain, claimed the U.S. President was ‘chronically incapable’ of formulating military strategy, falling short even of George W. Bush.

At home, the second term to-do list has been mired in problems, in particular the furious political rows that surrounded the introduction of ‘Obamacare’, his big idea for a new healthcare plan to reform America’s grossly inefficient health care system and extend health insurance to millions of poor Americans.

So what can he do in his final three years in power to win back the admiration he once inspired? Apart from reforming America’s immigration laws, the White House has run out of ideas.

It emerged this week that the Clintons keep a ‘grudge book’ listing the names of those who have wronged them.

Given the damage Mr Obama must have done to Hillary Clinton’s chances of succeeding him in the White House in 2016, his name is surely top of the list.

As for the First Lady, she plans to show she’s young at heart tonight by doing the Dougie, a hip-hop dance popular with cool American teenagers.

Fifty Shades Of Grey Movie: Sex Scenes Not As Intense As Expected