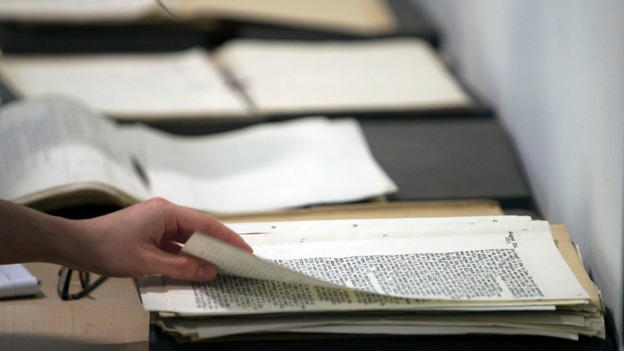 Around 300,000 pages of First World War unit diaries have been digitised, and “citizen historians” are encouraged to read them in a bid to unearth new discoveries about life at war.

In an “unprecedented opportunity” for both academics and the public, the National Archives is making the first batch of diaries from France and Flanders available online, and once complete it will comprise more than 1.5 million pages – opening them up to a global audience for the first time.

Also launching today is Operation War Diary – an online crowdsourcing partnership project between The National Archives, Imperial War Museums (IWM) and Zooniverse – which aims to uncover details from within the diaries.

The diaries are the most popular records from The National Archives’ First World War collection and are being digitised as part of the organisation’s centenary programme.

William Spencer, author and military records specialist at The National Archives, said making the diaries available online “allows people across the world to discover daily activities, stories and battles of each unit for themselves”.

Adding: “It’s interesting because it’s humanising it. War is a de-humanising thing.”

Mr Spencer said the opportunity has now been created for public, history enthusiasts, family historians and researchers to explore the official records, and said this “may lead to some new discoveries and perspectives of this important period of history”.

Reflecting on surprising revelations and interesting things he has learned from the diaries, he recalled cartoons, “slightly draconian” printed orders and instructions, details of acts of gallantry, as well as “watercolours of gas mask designs for horses”.

The first batch of unit war diaries reveals the real-time account of the first three cavalry and the first seven infantry divisions who were part of the first wave of British army troops deployed in France and Flanders.

They cover the entire period of the units’ involvement in the war, from their arrival on the front to their departure at the end of the war.

In this first batch of 1,944 digitised diaries is the daily account of the First Battalion South Wales Borderers in 1914, giving insight into the anxiety and terror of the opening days of the war with the First Battle of Marne and Aisne, right up until June 1919 with an account of sporting events, such as tug of war and rugby, and even farewell dinners marking the end of the war.

Mr Spencer said 25 regular volunteers digitised hundreds of boxes of diaries – most of which have endured around 45 years of being shuffled through – scanning them box by box and page by page from January until December last year.

Mr Smith said the information uncovered may not have previously been communicated through letters home or included in traditional history books – therefore building a new and more authentic picture of what it was like for the soldiers at war.

He added that the project will “help today’s generation to discover even more about the full life-stories of the people they choose to remember”.

An extract from an original document said: “A German officer rushed at the Rev Tron and nearly tore his coat from off his back. The padre who is a bit of a boxer, repeatedly struck the German in the face until they broke apart.

“Unslinging his glasses the German thrust them into the hands of the astonished clergyman, and tendered his surrender.”

Chris Lintott, founder of Zooniverse and presenter on BBC show The Sky At Night, described the crowdsourcing aspect as “an engine of motivation” for people to go and learn about the war.

Aiming to engage people in the centenary, Zooniverse, with its expertise in citizen science technology, previously used to map the stars, is encouraging volunteers to sign up to Operation War Diary.

Volunteers will be assigned a segment of a unit war diary and asked to tag key details from the pages, such as names, places and events.

The data inputted will be collected and used to enrich The National Archives’ catalogue descriptions for the unit war diaries, enabling people to trace their army ancestors.

There are 100 unit war diaries available on Operation War Diary in the first instance, with more to be added in the coming months.

Mr Lintott, from Zooniverse, said this was the organisation’s “first pure history project” and said he was excited to tell their citizen scientists that they could also be citizen historians.

In one diary, Captain CJ Paterson writes: “As I say all should be nice and peaceful and pretty. What it actually is is beyond description.

“Poor fellows shot dead are lying in all directions. Some of ours.”

He goes on: “Everywhere the same hard, grim, pitiless sign of battle and war. I have had a belly full of it.”

Culture Secretary Maria Miller said: “The National Archives’ digitised First World War unit diaries will allow us to hear the voices of those that sacrificed their lives and is even more poignant now there are no living veterans who can speak directly about the events of the war.

“This new online vehicle gives a very public voice to some of these soldiers, through which we will be able to hear their thoughts and feelings.

“Using Operation War Diary, we can follow in their physical shadow as they fought across the Western Front.”

Microsoft To Unveil Windows 9 In April To End Windows 8