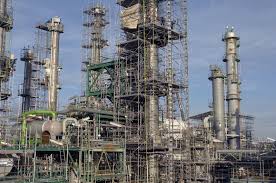 Nigerian National Petroleum Corporation, (NNPC) through its management, yesterday, explained how it spent $10.8 billion which is the remnant of the much talked about un-remitted $48.9 billion oil revenue.
The Corporation used the sum for subsidy on PMS (Petrol), repairs of vandalised pipelines and products/crude oil losses and maintenance of national strategic reserves. The management states that the aforementioned expenditures are legal.
The Group Executive Director, Finance and Accounts Directorate of the NNPC, Mr. Bernard Otti, clarified all these at a media session with Energy Correspondents in Abuja.

He had this to say:

“Whatever expenditure we have incurred in the discharge of the above national responsibilities are backed by the law setting up the Corporation”.

“the sum in question has been expenditures incurred as part of statutory responsibilities which the NNPC as a National Oil Company executes on behalf of the Federal Government and by extension the entire people of Nigeria.”

According to Otti, the $10.5 billion shows the expenditure incurred by the NNPC in the period under review and is made up of the following: subsidy claims, $8.49 billion, pipeline Management and Repair cost, $1.22 billion, products/crude oil losses, $0.72 billion, and cost of holding Strategic Reserves, $0.37 billion.

“there is a process by which revenue accrue into government account, there is also government policy stating that subsidy is still in place. NNPC does not create policies but it execute s policies, the subsidy claim has simply arisen because after 2011period. We saw there was no import of petroleum products when prices had gone up, NNPC was the sole importer and subsidy claims for this particular period had gone up. The subsidy claims normally is known to all relevant agencies.”

“It is also on record that for many years now, NNPC has been the main supplier of products to the nation. Most of these products are imported at international prices but sold at regulated prices.

“It is significant to note that the government has not made any payments to the Corporation in the name of subsidy during the period under review.
“I should like to use this opportunity to restate our position on subsidy. The subsidy is a policy of the Federal Government. We only implement what we are directed to,”

In conclusion, Otti emphasized that, “another area of huge expenditure on behalf of the Federal Government is the maintenance of national strategic reserves for petroleum products. At every point in time round the year, NNPC maintains huge petroleum products reserves on land and in the national territorial waters”