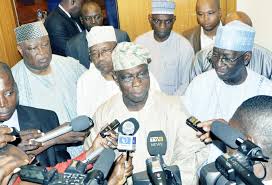 The National Chairman of Peoples Democratic Party, Alhaji Bamanga Tukur, has told former President Olusegun Obasanjo that his fatherly aura and experiences in politics are still required by the party in its drive to get stronger and more formidable.

Tukur made this known in his reply to a letter earlier sent by Obasanjo dated January 7, 2014 to the party and President Jonathan.

Tukur personally signed the reply, which was made available to journalists in Abuja on Saturday.

He said the PDP has more pressing challenges bothering most importantly on the coming governorship elections in Ekiti and Osun state as well as the overall general election scheduled for 2015, all which require strong inputs from the former President.

The PDP Chairman, while preaching continuous dialogue and need for stronger partnership among stakeholders of the party, told Obasanjo pointedly that the need for the ruling party to reclaim the lost grounds in the south-west required the full support of party leaders like him.

Sounding conciliatory in his response to Obasanjo’s letter, Tukur expressed gratitude to the manner of approach by the president in presenting his grievances on issues in the PDP south-west, stressing, “I thank you for your gesture and I pray that we shall all continue to dialogue and partner to move our party forward.

Tukur said there is need for PDP to attain success in the “Governorship elections coming up this year in Ekiti and Osun states and the subsequent elections in 2015 to reclaim lost grounds in the South-West.”

Related Topics:politicsPDPBamanga Tukur
Up Next

Obasanjo Writes Letter To Tukur, Notifies PDP Of His Withdrawal From It’s Activities