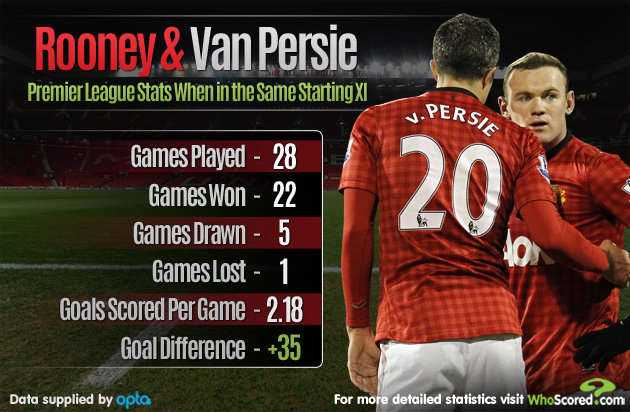 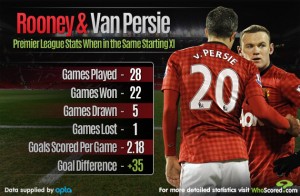 With reports that Robin van Persie could be back in the matchday squad ahead of Manchester United’s game with Swansea this weekend, the Dutchman’s return cannot come soon enough for the under fire David Moyes.

The 30-year old is rumoured to be unsettled at the club since the new manager’s arrival but happy or not, the Scot will be desperate to have last season’s top scorer back available. It’s fair to say that while the forward didn’t set the world alight at the start of the campaign, a tally of seven goals in 10 league starts remains an impressive return.

In his absence Wayne Rooney has been United’s leader on the field, taking on the burden of both goal scorer and creator for the side to register nine league goals and a further nine assists. While Danny Welbeck has also stepped up to the plate since moving into his favoured centre forward role the team as a whole has suffered, with a run of three straight defeats coming after a period when United had appeared to turn a corner under Moyes.

When a team has to contend with the loss of a key player it is always difficult to remain consistent. The luxury of having both Van Persie and Rooney in the same starting XI is something that United fans will certainly have been keen to see more of and the stats suggest that with both fit, the Red Devils would still be a force to be reckoned with.

The two clicked almost straight away when starting together, with the former Arsenal marksman profiting from Rooney’s ability to dictate play in advanced areas. However, since Van Persie’s arrival in the summer of 2012 the duo have started just 28 of a possible 58 league matches in the same XI.

United may have lost six league games already this season but none of those came in matches when both started and it seems the key to turning Moyes’ fortunes around at the club is likely to rely on the two staying fit for the rest of the campaign. Indeed, of the 28 games that they have been in the same line-up from kick off United have lost just once, winning 22 of those matches with an average of 2.2 goals scored per game.

In comparison, in the 30 games that either one or the other (or both) has been absent from the start of the match the reigning champions have lost 10 times. Their win rate, meanwhile, is only just over half (53.3 per cent) and it’s clear that with such figures they won’t be competing to retain their title this year.

Much of the blame for United’s demise has understandably been placed on David Moyes’ head but the side’s success last season came from having their two star players in the same XI. That’s a blessing that has evaded the new man at the helm in the most part since his arrival, and it could define his success, or lack thereof, at Old Trafford.

All statistics courtesy of WhoScored.com, where you can find yet more stats, including live in-game data and unique player and team ratings.