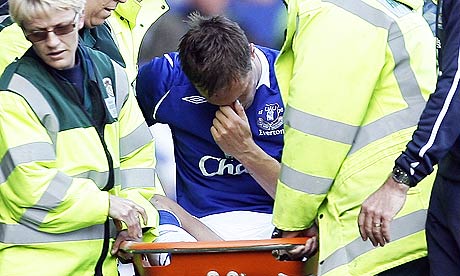 Skipper of Everton Football Club Of England, Phil Jagielka may be sidelined for up to four weeks on the sidelines with a hamstring injury.

The centre-back suffered the injury in his side’s 0-1 loss to Sunderland on Boxing Day,.

“With this soft tissue injury it could be up to four weeks, but knowing Jags he will be back earlier,” said Toffees manager Roberto Martinez.

“It is just the accumulation of games and the demands of this month – November into December is high-risk in terms of injuries to the players.

“When you have the number of games we play, it is understandable.”

Everton is five points behind Premier League leaders, Arsenal by five points. Everton’s next match is against Stoke City on New year Day