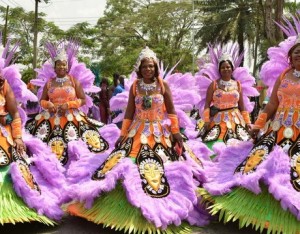 The Deputy Governor of Cross River, Mr Efiok Cobham, on Friday said the impact of the Carnival Calabar on the State was tremendous.

Cobham made the remark in Calabar at the Grand Finale of the Carnival Calabar 2013 with the theme: “Ain’t No Stopping Us.’’

“From the economic perspective, Carnival Calabar is a revenue driver.

“From the tourist’s perspective, Cross River has witnessed a large turnout of people in and outside the country participating in the carnival.

“Carnival Calabar attracts over 100,000 costumes, revelers, and a million local and international spectators. It is the biggest street party in Africa.’’

He said the carnival was a unique visual display of innovation and creativity, featuring cultural influences and traditions from the past and present in costumes, drama, dance and music.

The deputy governor expressed happiness for being alive to witness the 2013 carnival.

The News Agency of Nigeria (NAN) reports that the carnival was attended by top Nigerian musicians, Nollywood actors/actresses, politicians and international artistes.

Officers and men of the Nigeria Police Force and the Nigeria Security and Civil Defence Corps provided security coverage for participants in the 13-kilometre walk around major streets in Calabar. It started on Thursday.