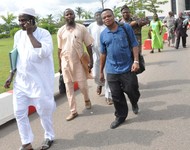 The Academic Staff Union of Universities (ASUU) in a Memorandum of Understanding with Federal Government on Wednesday said the five months strike ends next week.

Speaking to journalists, ASUU President, Dr. Nasir Fagge, who signed the agreement on behalf of the union, said the strike would be called off next week following agreement signed by both parties.

Fagge said the MoU contained all the demands presented by the union.

Briefing newsmen Wike said: “Today, I am very pleased to announce that all contending issues between ASUU and the Federal Government have been resolved to the satisfaction of the parties.
“Let me emphasise that we recognise and appreciate ASUU’s patriotic role and determination to ensure that our universities are well funded, resources provided and run like their counterparts in other parts of the world.
“We are all partners in progress and there is no victor, no vanquish in a struggle of this nature and our goal remains noble and targeted at moving our nation forward.
ASUU president Nasir Fagge said the resolution that was signed was a response to a letter the union wrote to the President through the Supervising Minister of Education.
“This document contains everything we listed in a letter to Mr President; we will now forward the document to our members for further directives,’’ he said.
He said that it is only ASUU’s highest decision making body that has the power to call off the strike adding that the body will meet within a week.
He commended parents, students and Nigerians for their understanding and patience, stressing that the struggle was to ensure that government puts the university system in order.
Present at the signing were the Vice Chancellors of Bayero University, Kano, Abubakar Tafawa Balewa University, Bauchi, University of Ibadan, University of Port Harcourt and University  of Lagos who mediated the meeting that led to agreement signing between the two parties.