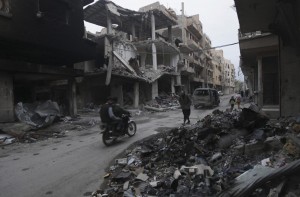 Political instability is a complex and many-headed beast, its tentacles reaching and intertwining with others all across the globe. The difficulties present in the world’s most shaky regions are obvious to everyone, from the struggling government bureaucrat to the everyday citizen watching events unfold. Even so, it’s useful for those of us sitting safely in the U.S. to understand and lightly dissect basic issues of countries often cropping up in our daily paper — and to examine them side by side. These five volatile countries have direct or indirect effects on other political entities, and it is hardly surprising how much overlap and influx of imbroglio reveals itself upon examination.

Instability in Turkey is not comparable to some of the more violent nations around the world. However, the country’s position both geographically and politically makes its inner workings highly relevant to U.S. international concerns. Turkey is considered an American ally — though how useful or positive an ally is contested. Halil Karaveli of the New York Times insists that the United States cannot continue to depend on Turkey to accomplish its middle eastern objectives — including the removal of President Bashar al-Assad from his theocratic leadership position in Syria. “Turkey is part of the problem. It is exacerbating Syria’s sectarian strife, rather than contributing to a peaceful and pluralistic solution,” said Karaveli.

Forbes pointed to Turkey’s recent defense missile system deal with China — which passed over an American deal — as evidence that relations between the United States and Turkey may not be as strong as they once were. However, just under a year ago sentiment was rather positive. “Turkey-U.S. relations reached almost its peak under Obama. [It] is obviously the consequence of the Arab revolts where Turkey and the US are very much standing side by side,” Sinan Ulgen, chairman of the Center for Economic and Foreign Policy Studies in Istanbul, told the Global Post.

What makes Turkey such an important — or possibly disappointing — ally for the U.S. are its neighbors. Bordered by Iran, Iraq, and Syria, Turkey is a geographic, religious, and political relative of many of the nations America keeps a close eye on. Syrian refugees seek shelter within its borders. Both fighting and trading transactions for oil and natural gas are occurring between Turkey and Iraqi Kurds.

“The Kurdistan deal with Turkey is a huge violation against the Iraqi Constitution because they didn’t make the deal with the coordination of the central government. This means the stealing of the Iraqi wealth, and we will not allow it,” said Deputy Chair of the Iraqi Parliament Oil and Gas Committee, Ali Dhari, to the New York Times this week.

There are also serious difficulties purely within Turkey’s own government. It saw heavy protests recently, responded to with tear gas and police violence. The protests center around multiple political issues, including public hostility towards the increasingly religious conservative leadership of Prime Minister Recep Tayyip Erdogan. “Since he took office [ten years ago], the prime minister has gradually shifted from pragmatist tendencies to ideological ones, from team work to personal decisions, from democracy to authoritarianism,” Ilter Turan, a Bilgi University professor, told the Gulf News.

Recent news in Egypt is the most salient to understanding the barometric readings of international sentiment towards the country’s military. In July of 2013, there was a military coup to overthrow President Mohamed Morsi, a member of the Muslim Brotherhood. The former president had been elected through a democratic government, but was considered by critics to be highly biased towards Islamic interests and not the proponent for human and social rights many had hoped for.

The president’s removal was met with protests from advocates of the Muslim Brotherhood and other citizen groups. In turn, the protests resulted in violent military and police suppression that led to many civilian deaths. The U.S. has been a long-time ally of Egypt and has provided aid to the nation for years, both military and financial. Following the violent reactions to protests, the U.S. cut back on a large chunk of aid to indicate its disapproval of military action.

“The United States strongly condemns the steps that have been taken by Egypt’s interim government and security forces,” said President Obama in a press release. “Given the depth of our partnership with Egypt, our national security interests in this pivotal part of the world, we’ve sustained our commitment to Egypt and its people. But while we want to sustain our relationship with Egypt, our traditional cooperation cannot continue as usual when civilians are being killed in the streets and rights are being rolled back.” Earlier this month, the New York Times reported that while a new constitution has been drafted, experts said it may not be enough to instigate the necessary changes, and protests and rallies are continuing.

Events in March of this year revealed the continued difficulties facing Afghanistan as it struggles to build its own military force — the Afghan National Security Forces — and stabilize its government, led by democratically elected President Hamid Karzai. The United States has been pulling military effort out of the nation, 33,000 troops in the fall of 2012, and the Afghan national force took lead on national security as of this year.

Two Taliban suicide bombings in March took place during a visit from U.S. Secretary of Defense, Chuck Hagel. Following the attacks, President Karzia made the inflammatory accusation that the U.S. and Taliban were working together towards creating Afghan dependency on America.

“The explosions in Kabul and Khost yesterday showed that they [the Taliban] are at the service of America. They are trying to frighten us into thinking that if the foreigners are not in Afghanistan, we would be facing these sorts of incidents,” said Karzai, as reported by the Associated Press. The extremist Islamic organization has also been highly publicized for its attack on Malala Yousafzai over issues of gender equality in education.

Post-9/11 Iraq is still dealing with a number of issues today which threaten the stability of its young government — with its first election held in January of 2010. The Kurdish shipments of oil and gas to Turkey is a more than just a loss of control for the United States.

A U.S. official in Baghdad told the New York Times that the shipments could constitute the largest threat to unity within Iraq — with independent income possibly encouraging those in Iraq-controlled Kurdish regions to seek autonomy.

Factional violence is also rampant in Iraq, with sixteen military and police personel killed by suicide bombers on November 25, and twenty-nine killed November 27 in a combination of bombings and attacks — according to the New York Times. Twelve were killed and forty-two injured in an attack in Diyala Province and a family was killed in eastern Baghdad on November 30.

It’s been two years since Muammar Gaddafi’s leadership ended and the politician was killed during the civil war in Libya. However, things in the country remain unstable, with extremist groups in Benghazi on the rise — according to BBC News, whose correspondent reports bombings and assassinations occur on a nearly daily basis.

Early Thursday morning, an American teacher was killed in Benghazi, and protesters in Derna were fired upon the same week — though extremist group Ansar al-Sharia denied involvement — according to Yahoo News. Libya’s Prime Minister, Ali Zeidan, said Wednesday that troops would be sent to Derna where things have gotten out of control. Zeidan was kidnapped in October and insists now that it was an attempted coup — signaling pressing instability within the Libyan government, according to The Guardian.

Zeidan stated that militia leaders would be under investigation for involvement. He also claimed that the minority in Libya’s National Congress were trying to erode at his position — possibly referring to the Muslim Brotherhood. “The Muslim Brotherhood has been trying to undermine me for months,” he’d said in September following a meeting with Egyptian military leaders — reports The Guardian.

Weep For Africa, Not Nelson Mandela

The President In Black And White