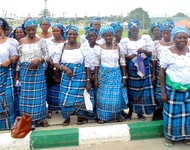 The Edo chapter of the People’s Democratic Party (PDP) on Tuesday in Benin launched an  empowerment package for widows in the state.

Mr Dan Orbih, the state Chairman of the party, said the programme was designed to cushion the effect of Edo government’s “harsh” policies on widows and the people.

He said the initiative became necessary because of the actions and decisions of some public officials.

The PDP chairman donated N50,000, in addion to N1 million already raised for the programme in the state.

The money was presented to the Oredo women leader of the party, Mrs. Pat West Erhabor, for disbursement to more than 50 widows who were present at the event.

Erhabor also collected N250,000 on behalf of Mrs Joy Ifijeh, the widow who was reprimanded for trading on walk way by the state governor.

Meanwhile, Mr. Henry Omoregie, the Director, Transformation Watch, a non-governmental organisation based in Port-Harcourt, has raised over N2 million for Ifijeh.

UNIBEN Opts Out Of ASUU Strike