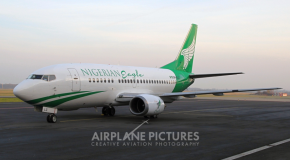 An aircraft belonging to Aero Contractors has landed in Nigeria painted in the national green and white colours. The aircraft had been flown abroad  for a C-check.

The aircraft which has a registration number of 5N-BLC returned within the week in the colours of the Nigerian Eagle; Nigeria’s New National carrier. The newly christened National career was formerly known as Nigeria One.
This adds credibility to the speculation in various aviation quarters that  Aero Contractors has been designated by the federal government as the new national carrier.

Earlier this year, the Nigerian government had made it clear that a new national carrier with a fleet of 30 aircraft would be set up.
A fortnight ago, the ministry of aviation refused to clear doubts that they had designated Aero as the new carrier.

Aero was recently taken over by the Asset Management Corporation of Nigeria (AMCON) after paying off billions of its debt.
The Spokesperson for the aviation minister said he does not know of the existence of ‘an aircraft in the Nigerian colours’. Mr Joe Obi however confirmed that the national carrier will be unveiled to Nigerians soon by his boss, Aviation Minister Stella Oduah.
According to Daily trust, a top management staff at Aero Contractors told their reporter in confidence that the airline has been designated the national carrier.
“This is very reliable now, we are told officially that our Aero has been chosen as the national carrier because of its safety track record among other reasons,” the source revealed.

The national carrier usually enjoys some privileges accorded by the federal government especially for international operations.
The new national carrier will bag: monopoly as regards lucrative routes and will be deeply involved in negotiating commercial, pools and bilateral agreements with foreign airlines. The new National carrier will also articulate manpower training for the sector and serve as diplomatic tool for Nigeria.