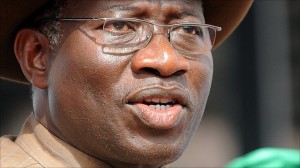 President Goodluck Jonathan who was in London to attend the  15th meeting of the Honorary International Investors Council Londonhas arrived in Abuja from London.

The News Agency of Nigeria reports that President Jonathan who fell ill in London thanked Nigerians for their show of solidarity, concern and best wishes.

But the arrival of the President greets the nation with the sack of  Mrs Aisha Umar from office as his Senior Special Assistant.

The sack of Mrs Aisha was contained in a press statement issued Sunday by the Secretary to the Government of the Federation Senator Anyim Pius Anyim.

The statement further indicated that Mrs Umar’s sack takes effect today, no reason was given for the sack of the Special Assistant on Social Development.

According to the statement by Mr. Sam Nwaobasi, the Special Assistant (Media) to the Secretary to the Government of the Federation, Senator Anyim Pius Anyim with Ref. No: PPR/OSGF/PR/02 did not give any reason for the action.

Nwaobasi stated that the termination of Umar’s appointment was “with effect from the November 25, 2013.