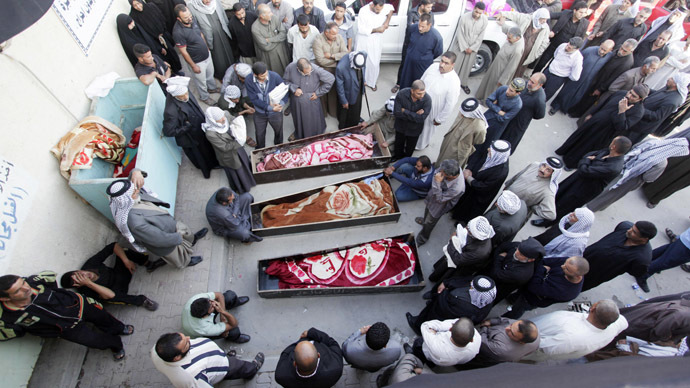 Mourners stand near the coffins of victims yesterday in Nafaj, south of Baghdad
PHOTO CREDIT: Reuters

No less than forty four (44) people have been killed just as dozens were injured across Iraq on Thursday in multiple attacks. The country was faced with series of attacks against Shia pilgrims. The attackers even employed suicide bombing in a religious procession held in the Eastern part of Iraq

The pilgrims, constituted mainly by the Shia Kurds had gathered to commemorate the 7th century battle of Karbala and celebrate the death of Imam Hussein, a grandson of Prophet Mohammad when tragedy befell them.

Most of the injured were taken to hospitals in Iraq’s northern Kurdistan region.

“I was near a group of pilgrims and suddenly I heard a big explosion,” Kadhim Al-Zarkooshi, a taxi driver who was wounded in the attack told Reuters, “then I found myself surrounded by corpses and wounded people, they were crying for help.”

No terrorist group has owned up to this attack yet but suspicions are rising that this may be the handiwork of the Al-Qaeda network. This suspicion may not be unfounded as it is common knowledge that the terrorist group targets Shia and Government forces very often.

It will please you to note that Ashoura is one of the year’s holiest days for Shia Muslims. The security forces usually impose high security measures in Baghdad and all Shia-dominated cities during this holiday