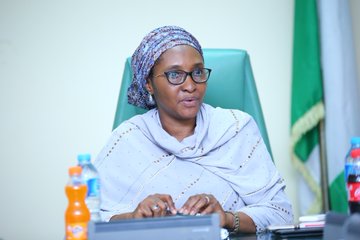 The Federal Government has proposed salary cuts for workers as a way of reducing the high cost of governance in the country.

The Minister of Finance, Zainab Ahmed, said the Federal Government was working to reduce the high cost of governance by doing away with unnecessary expenditures.

The minister made the disclosure public at the policy dialogue on corruption and cost of governance in Nigeria organised by the Independent Corrupt Practices and Other Related Offences Commission in Abuja on Tuesday, she said the President Muhammadu Buhari has directed the National Salaries, Incomes and Wages Commission to review the salaries of civil servants as well as the number of federal agencies.

Ahmed urged all government agencies to come together to trim the cost amid the country’s dwindling revenue.

She said the government also intends to remove some superfluous items from the budget in order to cut the cost of governance in the country.

She stated, “We still see government expenditure increase to a terrain twice higher than our revenue. The nation’s budgets are filled every year with projects that are recycled over and over again and are also not necessary.

“Mr President has directed that the salaries committee that I chair, work together with the Head of Service and other members of the committee to review the government payrolls in terms of stepping down on cost.’’

The Director-General of the Budget Office, Ben Akabueze disclosed that the cost of governance under the President Muhammadu Buhari regime has risen sharply from N3.61 trillion in 2015 to N5.26trn in 2018 and N7.91trn in 2020.