The Minister of Transportation, Rotimi Ameachi, along with the Ministers of Finance and Information and technology will appear before the House of Representatives on Monday to address concerns over  500 million naira in loans to be obtained from the China Export-Import Bank (ExIm) for construction of railways and other infrastructure.

The lawmakers claim to have found clauses in these contracts that ceded the sovereignty of Nigeria to China creating a resurgence of viral claims on social media.

The Nigerian Ministry of Finance in an attempt to check this misinformation, released a statement by the Director-General of the Debt Management Office (DMO), Ms Patience Oniha, on their Facebook page and Twitter providing clarification on these loans in contention. The statement was initially released by the DMO on September 11, 2018, and updated for June 18, 2020. Notwithstanding, these loans remain contentious and for this reason, we should know about the deals we make with China. 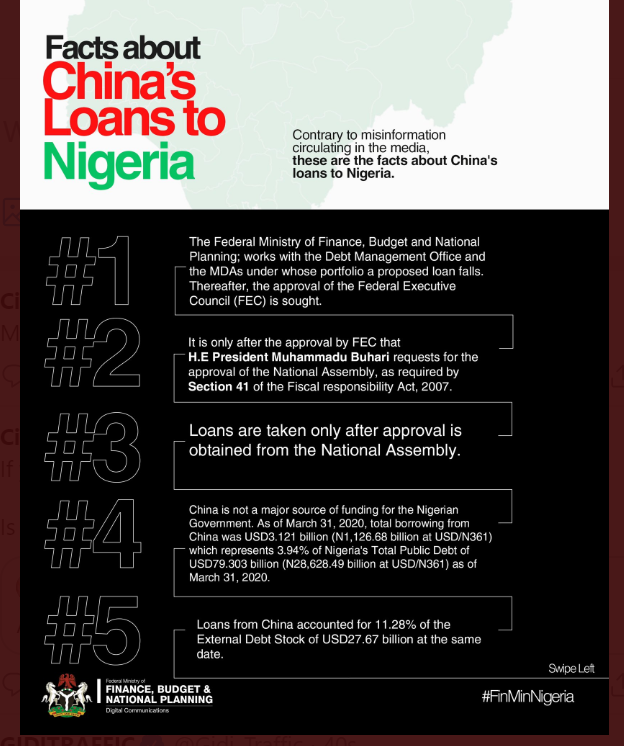 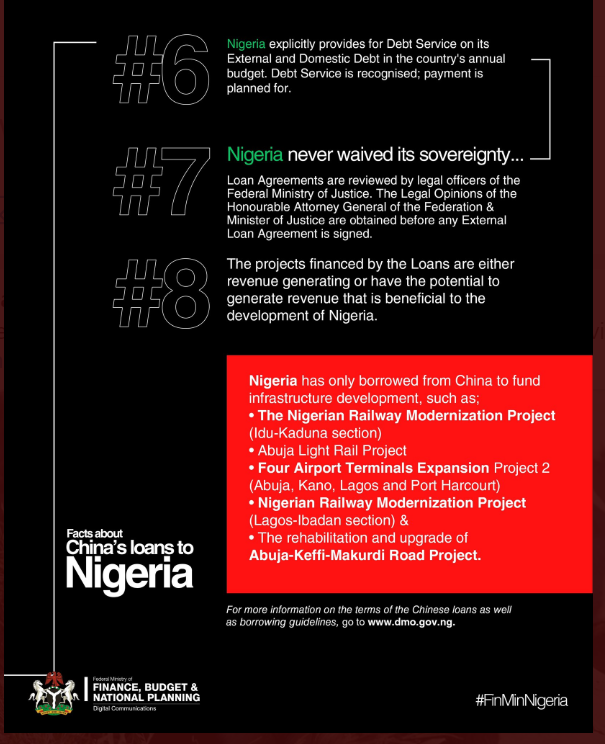 The terms and other details of the loan are available at www.dmo.gov.ng.

WHAT WE NEED TO KNOW ABOUT CHINESE LOANS:

The Chinese have a history of foreign aid as far as the 1950s when they assisted socialist countries and pariah dictators alienated by the West. By 1964, the Chinese Prime Minister Zhou Enlai during a visit to Gnana established the Eight Principles of Economic Aid which is the foundation for China’s foreign aid policy.

By its second principle, it states that: “In providing aid to other countries, the Chinese Government strictly respects the sovereignty of the recipient countries, and never attaches any conditions or asks for any privileges within the national budget and capital raised by the state-owned Export-Import Bank of China from the market“.

Today, China operates a broader foreign aid policy with key measures often similar to the official development assistance (ODA) measures, such as achieving economic growth through the advancement of physical infrastructure such as roads, rail, dams and telecommunications equipment. Though China occupies a position of power, they were once recipients of foreign aid. This history informs their focus, which is premised on bilateral negotiation between China and the borrower nation. These negotiations focus on industrialization through physical infrastructure and access to markets and natural resources. Africa is currently the largest benefactor of Chinese aid, with Guinea being the first recipient of Chinese loans in 1960.

Nigeria established diplomatic ties with China in 1971, eleven years after independence, under the leadership of General Yakubu Gowon. These ties have extended to military support as well as medical capacity building as witnessed in medical aid in the current COVID-19 pandemic. Notwithstanding, there are concerns that Nigeria is falling into debt-trap diplomacy.

In 2017, “debt-trap diplomacy” became the term of reference for Chinese loans. It holds the view that China is intentionally indebting borrowers to give China strategic advantages that include mineral resources, sea, and airports. Several examples have been cited about this theory, often recurring are Zambia and Kenyan experiences. However, researchers in the China Africa Research Initiative (CARI) located in John’s Hopkins School of Advanced International Studies have found these examples to be often misinterpreted.

Loan contracts concluded between sovereign entities are complicated in the sense that a sovereign can claim immunity from prosecution. In 1976, the United States adopted the Foreign Sovereign Immunities Act that legalised foreign governments’ immunity from lawsuits unless they had expressly waived this immunity.

This can be likened to the choice a person makes in waiving remuneration for work. It is legal to be paid for work otherwise it is considered slavery under Human Rights laws. But, it is also a fundamental right to opt-out of remuneration of their own free will for whatever reason. Applying this analogy to an immunity clause therefore, a sovereign could opt out of invoking their sovereign protection over penalties resulting from agreements.

According to the China Africa Initiative (CARI), “the waiver of sovereign immunity allows a sovereign state to be sued in a foreign court or submit to international arbitration.

However, once a judgment has been made, and a borrower is found liable for damages, there is the question of enforcement. Waiver of immunity from enforcement is different from the initial waiver for purposes of lawsuit or arbitration and is accompanied by serious technical legal difficulties pertaining to the sovereign immunity laws of the involved jurisdictions. Sovereign assets that are not used for commercial purposes (diplomatic missions, for example) are almost invariably protected. The extent of immunity protection enjoyed by sovereign assets used for commercial purposes would depend on each national jurisdiction’s laws”.

In the event of a dispute, the context of an international contact involves both parties electing a third party, such as a foreign court or an arbitrary tribunal, that will mediate such a crisis.

A review of several Chinese loan contracts by CARI concludes that most of these contracts include language on the waiver of sovereign immunity concerning arbitration and enforcement.

Considering a 1998 study on globalization referenced by the CARI which says that, “In order to be able to attract loans, it is rational for countries to commit themselves to promises that are perceived to be credible, so they often willingly waive their rights to sovereign immunity in loan contracts.” Policy experts advise that several measures be introduced into negotiations between China and borrowing countries. One of such is that agreements that waive sovereign immunity must not be entered into without appropriate scrutiny regarding the implications and penalties on a case-by-case basis. Also, when such waivers become necessary for the protection of the legitimate interests of the creditor – China, in this case- the scope of the waiver must be carefully marked out to achieve the exact legitimate interest.

In 2016 China agreed to loan Nigeria USD 5.3 billion for transport, power and information technology projects and so far have only disbursed USD3.121 billion, However, a signed loan agreement is not that same as debt as illustrated in this image;

Can China Take Over these projects if Nigeria defaults?

The Nigeria Debt Management Office assures that this situation is quite unlikely as the country allocates external debt repayment in her annual budget. This ensures that external loans are paid.

The Chinese government has declared that its foreign aid is provided with no political attachment and to seek cooperation and benefit. Moreover, The Chinese operate on The Five Principles of Peaceful Coexistence.

According to its Foreign Ministry, in a statement, China abides by a ‘Five-No’ approach in relations with Africa:

The China Export­-Import (EXIM) Bank is responsible for the disbursement of loans while interest on these loans is subsidized by China’s Ministry of Commerce. The loans are offered in the form of projects which the ministry allocates to Chinese contractors.