1 day ago
Special Report: Grappling Trauma of Rape, A Survivor’s Account
1 day ago
In Kano, boat ferrying school children capsize, 20 bodies recovered
1 day ago
Just In: UN-vaccinated Nigerian civil servants locked-out of govt secretariat in Abuja
2 days ago
“Should have gone to Lewandowski” – Fans Kick as Messi Wins Seventh Ballon d’Or Prize
4 days ago
Tragedy in Ondo as a woman is brutally murdered while cleaning Church ahead of Sunday Service

A video claiming that N-Power beneficiaries were promised permanent benefits by the Senior Special Adviser to the President on Job creation and Youth employment, Afolabi Imokhuede, is circulating on N-Power Facebook groups.

Misleading: There was no promise of permanent benefits for N-Power beneficiaries after re-election. Nonetheless, this was implied when Mr Afolabi associated these concerns with the re-election of the current government. 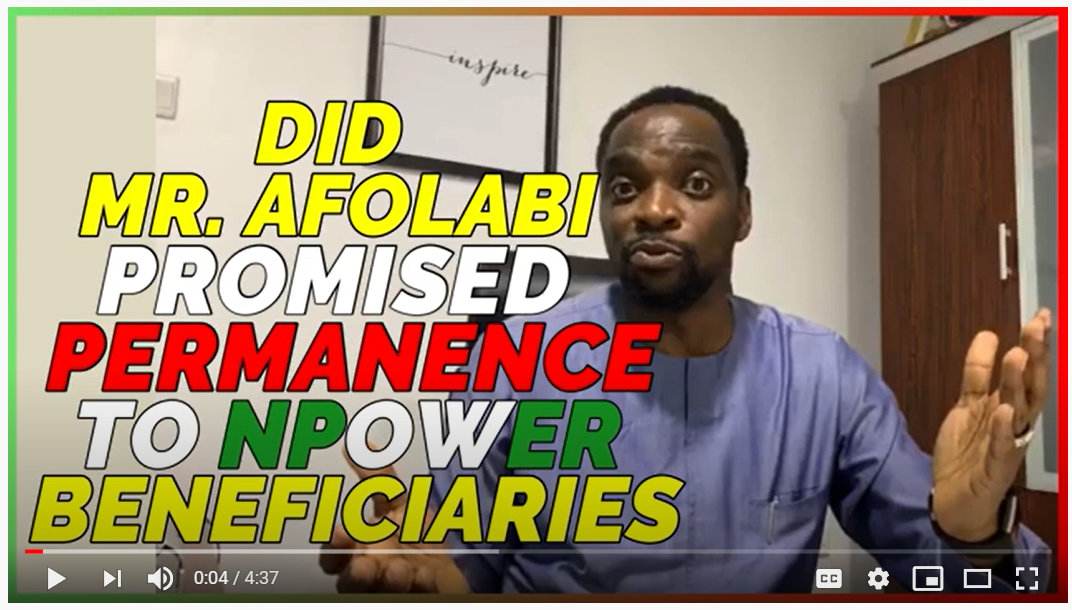 A 4:37 minute video showing the SSA addressing N-Power beneficiaries suggests that Mr Imokhuede promised a permanent status of employment to the volunteers if President Mohammadu Buhari won the 2019 re-election bid.

This video, captioned DID AFOLABI IMOUKHUEDE PROMISED PERMANENCE TO NPOWER BENEFICIARIES? was published on YouTube. 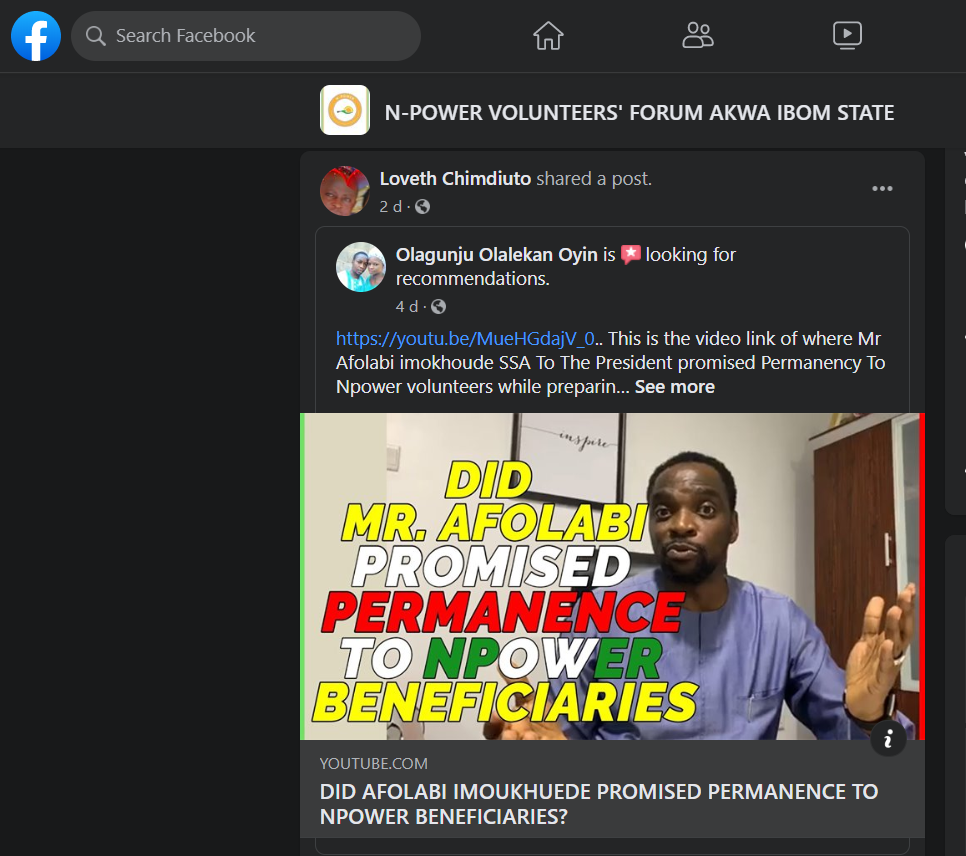 The N-power program was initiated by President Muhammadu Buhari in 2016 to provide unemployed Nigerian youths with vocational training and apprenticeship. At the time of inception, the government registered  200,000 beneficiaries across key industrial sectors such as agriculture, health, education and tax.

The duration of engagement varied across programmes. For example, The N-Power Volunteer Corps runs for two years while the N-Power Build lasts only three month. But there was no mention of duration of the benefits for beneficiaries on the official website of N-Power.

The N-power programme is currently mired in controversy and protest as the beneficiaries demand for unpaid salaries and extension to their assignments. Only last month, the disengagement of Batch A and B volunteers was announced after an indefinite extension which eventually ended on the 30th of June. At the time of this fact-check, registration for N-Power Programmes has exceeded five million applications.

The video referenced on this group was a live chat by Mr Imokuede just before the 2019 elections. He inferred that the matter of permanence and continuity of the programme would  stand a better chance of being addressed if the APC and President Buhari won re-election.

However, a further search revealed another Facebook live video chat by Mr Imokuede dated March 4, 2020, updating the volunteers on progressive ways to upskill and take advantage of the N-Power opportunities.

In this live stream, however, he addresses a question in reference to his comment on the duration of the benefits being tied to their permanent voters’ card.

Here is Imokuede’s reply, timestamped, 15.23,  “Well, this was during the elections and campaign when I said to you that [your] permanence it’s in your hands. And I said that permanence is by your PVC, well, the reason I can still [be] continuing this conversation with you and also exploring and sharing with you all the multiple options that you can tap into is because you listen to me and used your PVC to re-elect Mr president and his vice… and I have thanked you… and they have all thanked you and all Nigerians … even those that didn’t vote for them – that is what I meant by that”

The video dated March 6, 2020, is in clear contrast to the live stream on March  4, 2020; this is evident in the message, being that he clearly referenced President Muhammadu Buhari’s re-election bid in that video.  Also, the video was shared by Naija Events, a YouTube channel dedicated to trending videos and online satirical contents which does not make it a credible news source.

It is also important to realise that the disengaged Batch A and B volunteers will return to unemployment which is projected at 33.5% this year.