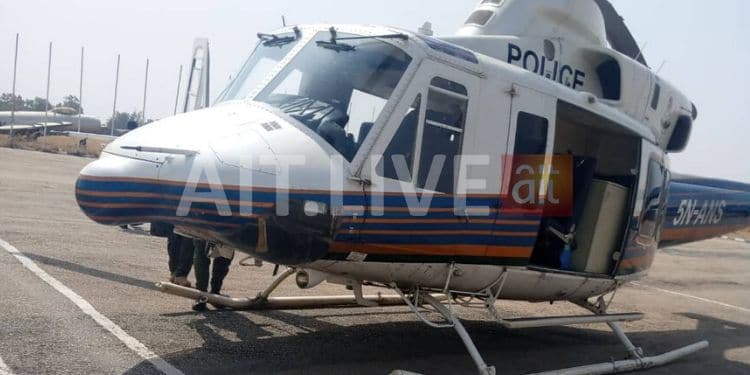 Africa Independent Television, AIT is reporting that a police patrol helicopter has been shot down by bandits in Kuduru village of Birnin Gwari in Kaduna State, North-West Nigeria.

The helicopter which was on surveillance operations in the area was attacked on Wednesday at about 11.20am.

Sources from the Nigeria security community say the incident left the pilot and co-pilot in critical conditions and they are currently receiving treatment at a hospital in Kaduna.

The Force Public Relations Officer, Frank Mba who did not deny the incident when contacted told AIT that he is putting together the facts of the incident before issuing a media statement.

There has been a rise in criminal activities including kidnappings, and armed robbers by various bandit groups in Kaduna State.

Nigeria seemed overstretched already with conflicts as a result of the combined threat from a deadly Boko Haram insurgency and the farmer-herder clashes that have killed 35,000 and over 3,600 respectively.

The two conflicts, combined with pockets of communal clashes, have created a vast humanitarian crisis that has displaced some 2.5 million people across the Lake Chad region, 1.8 million of whom are inside Nigeria.

Boeing 737 skids off runway, splits into three at Istanbul airport