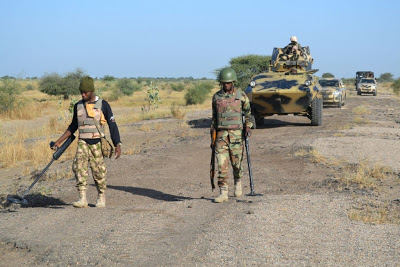 The United Nations Office for the Coordination of Humanitarian Affairs (UNICA) and the Action Against Hunger (AAH) on Friday night condemned the execution of the four abducted humanitarian workers by Boko Haram.

The ISWAP faction of Boko Haram on Friday shared a gory video recording that detailed the execution of four out of the five abductees that remained in their captivity.

The four slain aid workers who were abducted on July 18 were staff of the AAH.

Ms Taku was the one that spoke on behalf of the five others (now killed) when Boko Haram abducted them in July.

Last July, an employee of AAH, two drivers, and three health ministry personnel were kidnapped while delivering humanitarian aid to extremely vulnerable people in Borno State. The first hostage to be executed from the group was killed at the end of September this year.

The UN Humanitarian Coordinator in Nigeria, Edward Kallon, in a statement condemned “the announced execution of four aid workers by armed groups in Nigeria’s northeastern Borno State on 13 December, according to a statement released Friday night.”

Mr Kallon pleaded that Ms Taku should be released at once.

The AAH had also issued a statement mourning the murder of their abducted staff.

The relief agency said it condemned the killings “in strongest terms” even as it also regrets that the calls for the release of the hostages were not hardened.

UN Humanitarian Coordinator, Mr Kallon, said he was “deeply saddened and outraged by the news of the tragic killing of four aid workers who were held captive by armed groups for almost five months.”

“My thoughts go to their families, friends, and colleagues who are enduring unspeakable pain and hardship,” the UNOCHA statement quoted him.

He said the four men were amongst the six aid workers who were abducted when their convoy came under attack near Damasak, in Mobbar LGA.

“They were working on a health project implemented by the INGO Action Against Hunger. One of the drivers was killed during the attack and another was reportedly executed on 24 September 2019.

Mr Kallon maintained calls for the release of other humanitarian workers still in captivity.

“I plead for the immediate release of Grace Taku, the only woman who was in the ACF team, and whose whereabouts remain unknown,” he said.

“I also call for the immediate release of Alice Loksha, a nurse and a mother, who was abducted during an attack in Rann in March 2018.”

He described December 13 as “another sad day for the people of Nigeria and the humanitarian community supporting them.

“These colleagues were devoting their lives to helping the most vulnerable communities in Borno State. Despite the risks, they were driven by the values of solidarity and humanity.”

He said the United Nations and NGO partners in Nigeria are working to bring vital assistance to over seven million people in the crisis-affected states of Borno, Adamawa, and Yobe.

Meanwhile, President Muhammadu Buhari has condemned the killing of four aid workers by members of the Islamic State in West Africa Province (ISWAP).

Four out of the remaining five abducted aid workers of Action Against Hunger (AAH), an international non-governmental organisation (NGO), were reportedly killed on Friday.

The insurgents blamed their action on an alleged breakdown of talks with the federal government.

Reacting in a statement by Femi Adesina, presidential spokesperson, Buhari said the defeat of evil by good is inevitable “no matter the pyrrhic victory evildoers seem to win” .

The president commiserated with the families of the deceased and reiterated his administration’s commitment to “beat evil” in the country.

“The President feels saddened by the claimed development, and commiserates with the family and loved ones of the aid workers, who had offered themselves to serve humanity at grave risks,” the statement said.

“The aid workers had been abducted near Damasak, Borno State, in July, and had been held despite all efforts to secure their release, till their alleged execution.

“Evil will always be defeated by good at the end of the day. Whatever seeming victory evil records, eventually rebounds on the evildoer.

“We are resolved to beat evil in this land, and we remain unrelenting till we achieve it.”

Buhari asked all insurgents to lay down their arms, and rejoin humanity.