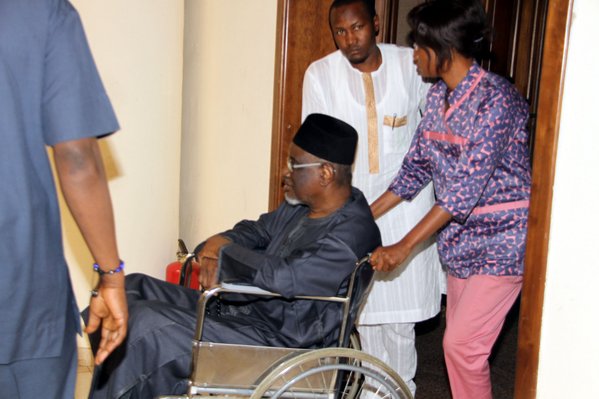 Former Peoples Democratic Party national chairman, Haliru Bello Mohammed will be under the supervision of the Inspector General of Police, Solomon Arase while his son will be in jail pending the perfection of his bail.

This was the verdict of Justice Ahmed Mohammed of a federal high court in Abuja, Nigeria’s capital.

The judge ordered that the son of Haliru Mohammed be remanded in Kuje prison pending the perfection of his bail while his father should continue to be in admission at Abuja Clinics in whose ambulance he was brought to court on Tuesday.

Mohammed and his son are being tried for collecting N300million from former National Security Adviser, Sambo Dasuki.

The duo pleaded not guilty to the four count charge against them which include money laundering and diversion of funds.

During court proceedings, the prosecution counsel argued that the court remand Mohammed and his son in prison pending when a date for trial is picked.

The defence counsel however opposed the prosecution counsel and asked that the accused be granted bail.

SERAP Wants EFCC, ICPC To Prosecute Executives Of CBN, Other Banks Over Their Involvement In Arms Procurement Scandal