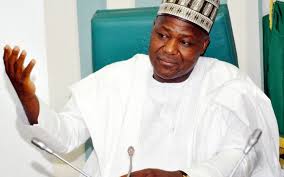 Speaker of the House of Representatives, Honourable Yakubu Dogara, on Sunday, in Jerusalem, the capital city of Israel, publicly revealed how God used the Ekiti State governor, Mr Ayodele Fayose, to win the battle associated with his election as Speaker.

Giving his testimony at a special pilgrimage programme: “A day with Jesus for Nigeria in Israel,” organised by the Nigerian Christian Pilgrims Commission (NCPC), held at the International Conference Centre (ICC), Jerusalem, Honourable Dogara, who emphasised the importance of prayers in the affairs of a nation and individuals, said he had lost hope of becoming the Speaker of the House of
Representatives, as many forces were against him until God himself intervened.

“Concerning the race for speakership race, it was almost the same story to how I won the election to the House. Some of our members and
the powers that be said they did not want a fundamentalist Christian, that I am a fanatic.

“At a point, I decided to leave everything to God, having realised that human efforts were not working, even my supporters had resolved
to accept the deputy speakership offer, which I declined.

“In the process, I think a few days, thereafter, that I ran into my brother, the governor of Ekiti State, Ayo Fayose, for the very first time. When I got to him, I did not know I was coming to meet a prophet, I thought I was coming to see a politician.

“If they had told me what happened that day was going to happen, I would not have believed it. When we got to him (Fayose), he took us to
a swimming pool, told everybody to remove his/her shoes, asked us to hold our hands, kneel down and he started praying.

“As he started the prayers, I said wow! I have never seen or heard a politician pray in this version before, but I thank God that those
prayers really worked for me.”

The Speaker said he was not surprised at what Fayose had become, adding that his experience had turned him to a firebrand as testified
by Fayose himself earlier during the programme. “Come and see the words coming out of Fayose’s mouth. He mentioned my name, saying ‘I pronounce you the Speaker of House of Representatives’, and he said the God who made his own possible, would make my own possible.”

He urged Nigerian leaders to seek the face of God in the ruling of the country and not lean on their wisdom or knowledge alone, saying only
then, the change all were clamouring for would come.

Fayose and other governors present, including the Benue State governor, Samuel Ortom; Plateau State governor, Simon Lalong had testified to how God, through prayers, changed their lives for better.

Saraki’s Persecutors Are In My Party, The APC, Says Senator Shehu Sani