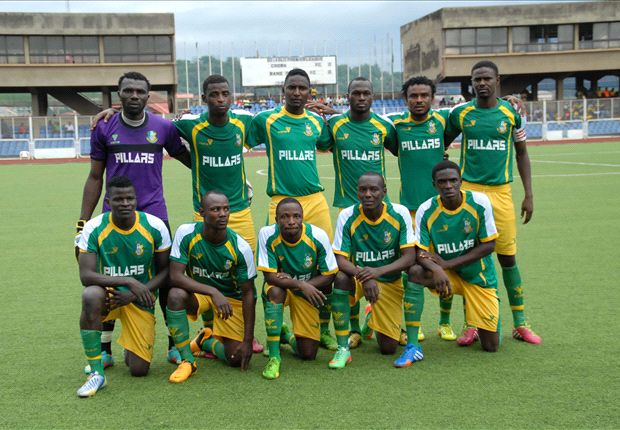 Nigerian champions Kano Pillars failed to win big against Mohgreb Tetouan and have crashed out of the Caf Champions League before the group stages for a third straight year.

Goal.com reports that the Nigerian champions beat the Moroccans 2-1 at the Sani Abacha Stadium, but failed to overturn a 4-0 deficit suffered two weeks ago in Tetuouan.

Goals from Tony Omayerue and Rabiu Ali helped the Nigerian champions to secure a 2-1 win against the 10 men of Tetouan after Mouhcine Iajour had put them ahead.

Having lost 4-0 in the first leg, Pillars needed at least five goals at home to stand a chance of going through to the next stage of the competition.

The visitors consolidated on their chances as first-leg hat-trick hero Iajour snatched the lead in the 33rd minute capitalizing on Pillars’ concentration in attack.

However, the hosts responded in the 58th minute through Omayerue who fired home from a goal mouth scramble after heavy pressure to lift the hopes of the fans for a comeback.

The many chances created by Okey Emordi’s men were unconverted due to lack of clinical finishers – the absence of Gambo Mohammed and the exit of Christian Obiozor was felt heavily.

When the visitors were reduced to 10 men as Hazael Houssani was sent off in the 72nd minute following a spurious challenge, it lifted the hopes of the hosts.

Sadly, Pillars could not capitalise on the one man advantage as they only managed to grab their lead through Rabiu in the 89th minute to secure victory on the evening which was not enough to see them through.

The Nigerian champions have now failed to qualify for the group stages after three attempts in a row leaving Enyimba as the country’s only representatives left in the competition.