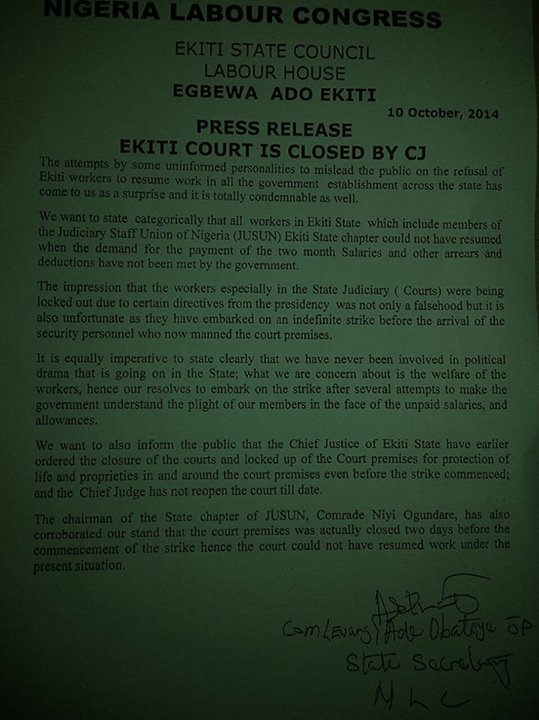 Contrary to insinuations in some quarters that President Goodluck Jonathan ordered the closure of courts in Ekiti State, the state’s chapter of the Nigeria Labour Congress (NLC) has said the continued closure is as a result of the ongoing strike embarked upon by public servants in the state over unpaid salaries and allowances.

The NLC was reacting to a statement by the All Progressives Congress (APC), which through its National Publicity Secretary, Alhaji Lai Mohammed, accused the President of ordering that the Ado-Ekiti High Court Complex be sealed off until the Governor-Elect, Mr Ayodele Fayose, is inaugurated.

In a statement in Ado-Ekiti on Friday, the NLC State Secretary, Comrade Ade Obatoye, warned politicians against reading political meaning to the issue and stop having the impression that the strike and the recalcitrant posture of the workers to resume work was political.

The NLC stated categorically that the ongoing industrial feud between the workers and government also affected the Judiciary Staff Union
of Nigeria, which it said accounted for the closure of courts.

It said, “We want to state categorically that all workers in Ekiti State, which include the members of the Judiciary Staff Union of Nigeria could not have resumed when the demand for payment of two months salaries and other arrears and deductions have not been met by government.

“The impression that workers in the judiciary were being locked out due to certain directives from the Presidency was not only a falsehood, but also unfortunate as we have embarked on indefinite
strike before the arrival of the security personnel who now manned the court premises.

“It is equally imperative to state clearly that we have never been involved in political drama that is ongoing in the state. What we are concerned about is the welfare of the workers, hence our resolve to embark on the strike after several attempts to make the government understand the plight of our members in the face unpaid salaries and allowances.

“We want to also inform the public that the Chief Justice of Ekiti State had earlier ordered the closure of courts premises for protection of lives and property in and around the court even before the strike commenced, and the CJ has not reopened the courts till date.

“The Chairman of the state chapter of JUSUN, Comrade Niyi Ogundare, has also corroborated our stand that the court premises was actually closed two days before the commencement of the strike, hence, court could not have resumed work under the present situation,”he said.

It would be recalled that workers in Ekiti State have been on strike since last week over the non-payment of their August and September salaries as well as deductions from their July salaries.

Heavily armed security agents, comprising soldiers, police and Nigerian Security and Civil Defence Corps had since Tuesday took over the Ado-Ekiti High Court Complex over apprehension that some judicial officers were planning to commence Fayose’s trial secretly, despite the fact that the state CJ has not officially reopened the courts.

The National Judicial Council (NJC) that intervened in the crisis rocking the state judiciary had last week ordered that security be beefed up at the complex.

Army Colonel, 10 Others Arrested For Sabotage