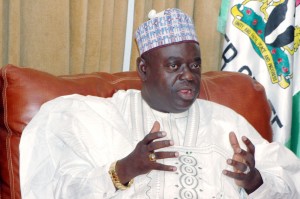 When I read the news report a few days ago credited to Governor Muazu Babangida Aliyu that he would release very soon, a list of 400 northerners that the presidency plans to bribe to secure 2015 elections in almost all the newspapers, it was clear that the Niger State governor has come to a full cycle in political troublemaking.

Aliyu’s metamorphosis is at the same time as confounding as it is predictable.  It is confounding because, the Niger State governor started out in 2007 as perhaps the most nationalist of all the governors. Yes, it is the same Aliyu that abolished the distinction between indigene and non-indigene in the employment of staff members in his state.

Before him, the best a non-indigene could get was contract employment.  To Aliyu’s credit, he was also the first governor that was ethnic blind when paying the WAEC fees for secondary school students in his state.  The governor rationalised his actions by rightfully arguing that the non-resolution of the citizenship question in the country remains one of the greatest albatrosses to our national development.

Aliyu did not stop at implementing these nationalistic reforms but also talked about them everywhere he went, in the media and in the many lectures he delivered.  Today, what Aliyu is advocating is no longer nationalism, justice and equal opportunities. He is now a power monger, an ethnic jingoist and a northern irredentist.

Right from the point he assumed the position of the Chairman of the Northern Governors Forum, Aliyu’s worldview has been convoluted.  He now believes that a part is more important than the whole.  He has been sucked in by the forces of parochialism in the North, a force that has been shameless in its quest for power to return to the northern region. This quest has been so brazen that one wonders if the decision of who becomes Nigeria’s president in 2015 is not entirely in the hands of the selfish feudal politicians boasting about reclaiming “their power”.

Governor Babangida Aliyu gave hints of his descent to provincialism in the build-up to the 2011 general elections. He was amongst the strongest voices for the politics of zoning in the PDP. They did their best in trying to deny President Jonathan a chance to contest the presidency in his party by seeking to elevate the zoning clause in the PDP constitution over and above the Nigerian Constitution. When the northern irredentists led by the former vice president, Atiku Abubakar, saw the vehemence of the people in insisting that unsettled rules of a political party cannot override the national constitution, governors like Babangida Aliyu reluctantly backed Jonathan for the presidency in 2011, or so it seemed.

It is quite clear now that what Aliyu and his co-travelers did in 2011 was simply to hold fire.  The Niger state governor was to resurface less than two years after the 2011 elections with tales of a one-term agreement he claimed President Jonathan entered into with the PDP governors in 2011.  Nigerians are still waiting to hear from Aliyu those who are signatories to the said agreement.

Now, on the basis of this nebulous agreement known only to Aliyu, a conspiratorial gang-up was forged against Jonathan within his own party.  Nigerians will also want the egoistic Niger governor to explain to them when the decision on who governs the country was passed on to a feudal group of governors by the people.  It is not surprising, therefore, that in the past one year, a group of seven governors in the PDP has abandoned issues of governance and development in their states.

Their main focus has shifted to stopping President Jonathan from contesting the 2015 presidential election.  From Port Harcourt to Minna, Ilorin to Kano, Yola to Sokoto and Dutse, the poor indigenes of these states hardly see their elected governors any longer.  The governors have summarily relocated from their state capitals to Abuja, abandoning the electorate to their own fate in their selfish and parochial pursuit of Jonathan’s job.

Interestingly, President Jonathan has stuck to his gun not to be distracted by any 2015 politics as he does his best to keep the contract he entered into with the Nigerian people in 2011.  While he is yet to announce his interest in seeking re-election in 2015, six PDP governors from the North and a fifth columnist from the South-south are busy breaking their heads and losing sleep over how to stop the President.

Perhaps when it became clear to those PDP northern governors and their props from behind that Nigerians are too informed to be hoodwinked with the tale of one-term agreement entered into by President Jonathan, they resorted to other tactics. And that tactics include causing as much confusion as it is possible within the ruling party.

First, they demanded that PDP national chairman, Bamanga Tukur, be sacked.  Second, that President Jonathan must not seek re-election in 2015 and third, that on no account must they be investigated for corruption by the Economic and Financial Crimes Commission (EFCC)! On the three scores, they have become frustrated because for the first time, perhaps, they (these governors) are not having their way.

It is no longer news that five of the original G-7 Governors have left the PDP, a national platform through which they were elected, to join the ethnic-based All Progressives Congress (APC).  Yet, what is worrying for many discerning Nigerians is that this group of northern governors led by the Niger state governor is not laying claims to the presidency in 2015 on the grounds of providing Nigerians with superior performance in office.

Of course, that argument would be difficult to make, anyway, given their tepid and woeful performances in the past six years as governors of their various states. The northern states without any qualification remain the most impoverished in the country as prebendal politics has been taken to new heights by these feudal lords who call themselves governors.

In the states governed by those now seeking to reclaim power in the name of the “North”, infant and maternal mortality is still soaring; polio is ravishing innocent children; the greater percentage of children of school age are out of school; potable water is still beyond the reach of the greater number of the population; healthcare facilities are still not accessible to the larger population; 80% of Nigerian beggars are from these states; and poverty is generally biting harder in these states!

While Governor Aliyu is busy uncovering his so-called list of the 400 northerners to be bribed to betray their region (which again may turn out to be phantom), let him be told that no nation develops by playing the politics of ethnicity and parochialism.  It is a shame that Aliyu, a very educated man, who ought to be a shining light for his people, is steeped in particularism and politics of irredentism so much so that he is now denying his people the benefits of his good education.  If a man like Governor Aliyu can believe that where a man comes from should be the overriding factor in choosing the Nigerian President, who can blame the Boko Haram insurgents for their bigotry?

The Women Around Oshiomhole’s Neck